As part of our drive to build capacity towards Teaching School status Canons hired 6 Pedagogy Leaders from across the staff to put rocket boosters onto our existing Outstanding Pedagogy Project (OPP as in our twitter handle). The project, as I have blogged about previously is to capture the art, craft and science of effective teaching as it best suits the context of our school community, students and teachers in order to gather the strands into a Canons Pedagogy or house style of teaching and learning.

The four-term role of the Ped Leaders, as we have come to call them, was to bring two years of work to a conclusion and identify the core ethos, structures and techniques of the Canons Pedagogy, to share these with staff and students and to create a sustained (and sustainable) programme for a full implementation through collaborative pedagogic development practices. Most of all, their job has been - and continues to be - to engage and enthuse staff in this process, to retain a bottom-up focus and to find the surplus of excellent practice rather than start from an assumption that teachers' classroom practice is a broken thing in need of a quick fix.

We are now at the end of the first full term of their work and the results have been magnificent. The team of Ped Leaders is made up of two Heads of Department, an AST, a TLR holder and two NQTs covering five different subject areas and they have attacked their brief with relish, skill and sensitivity. I'll leave @renniesherrie to share with you how they have developed over the term, but this post is focused on their first major public challenge; to plan and deliver an INSET day to introduce the core principles underpinning their Canons Pedagogy.

Their first significant task in the process was to relegate the Deputy Head (me) and Assistant Head (@renniesherrie) to the role of 'guides on the side' and to ignore our guidance on how they should do the day completely. I say 'relegate' but the truth is we were delighted at their chutzpah and sense of adventure (or risk as @alatalite might have it). They trashed everything about the way in which INSET days are normally done (not in the Hall, no Head or SLT introduction, a welcome breakfast, a full programme, Subway lunch, etc, etc) and they invited their SLT leads to get involved purely to assign to us admin tasks to support their vision of the day (our watchword became "what the Ped Leaders want, the Ped Leaders get").

And their product? The Lazy Teacher's INSET day (we have apologised in person to @lazyteacher and now hope that the copyrighting laws aren't too tough). The aim was to introduce the overarching structure of the Canons Pedagogy - essentially the Accelerated Learning Cycle - and to showcase a range of techniques to exemplify each phase of the cycle through pedagogy with our teachers as learners. Their determination to avoid a powerpointed lecture approach and to model the techniques and structure we were advocating throughout the day was a testament to their concern that the actual classroom be the focus of the INSET.

The only problem with this approach was that it made the Ped Leaders the teachers of their peers, and as the day approached some of them began to express concern that it might all fall flat and that colleagues might not participate as learners, particularly in the highly active sessions. This was where @renniesherrie and I were able to feel a real sense of participation in the organisation of the day. But, of course, their concerns were unfounded and once the day was upon us they came to realise that engaging and enthusing learners is pretty much a constant whether they are 13 or 31 or twice that age. They were helped by the fact that the cafeteria staff had played a blinder with their full English breakfast that got the staff buzzing from the first moment; a reminder that the little things often make all the difference to large groups of people.

On the other hand though food alone won't mask the faults of a poor INSET day and the real quality was in the sessions themselves. The Ped Leaders, @biomadhatter and myself (I was allowed off the leash as a teacher on the proviso I didn't let them down!!) delivered sessions that really did demonstrate how to get the students working. A typical comment between us was how little we were doing beyond the initial planning and our in-session facilitating (apologies but I had to use the F word) and how hard our 'students' were working - a fact that was not lost on the teachers we exhausted that day. At least three members of staff reported that this was the first INSET day where they had not looked at a clock or watch for the entire day. 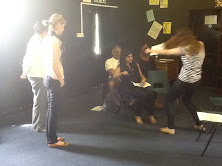 At the end of the INSET day the six Ped Leaders, @renniesherrie and I got into taxis to Kings Cross to head up to the Cramlington Learning Village festival. The first task was to read the evaluations (written on cups in free form style as requested by the Ped Leaders) as we crushed a cup in the wait for the train. Watching the faces of our colleagues as comments like "the best INSET ever", and "can we get started now", and "so inspired", and variations on that theme emerged was truly one of the most pleasurable parts of my career, but it was the way that they immediately began buzzing about "what next?" that really flabbergasted me. And beyond that still, the way that they absorbed the phenomenal school that is Cramlington by being inspired by it but not overwhelmed by it was a joy to behold. 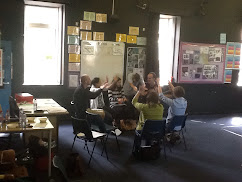 But of course INSET days have no meaning if they have no impact beyond the feelgood vibe of the day, however welcome that is. It's too soon to fully evaluate at the moment, but it is clear from discussions with key departments and individual teachers that the Accelerated Learning Cycle is liked and understood, that Flipped Learning has enthused many, and today I have worked with the RE department to apply SOLO to their lesson planning processes. In the meantime the only people in the school who are less than content with the measures of impact of the INSET day are the Ped Leaders themselves, and they have once again sidelined their SLT 'guides' to prepare the next phase of staff engagement in pedagogy. I'd wish them good luck in this, but they don't need it. What they need is for me and my SLT colleagues to stand back, let them loose, support them when needed and watch them as they change the nature of teaching and learning at Canons in a way which exceeds outstanding because it is practitioner-led to its core.

Posted with Blogsy
Posted by Deputy Blog at 10:50