When asked to plan three sessions on English A* revision we knew we wanted to get the students to achieve flair and sophistication in their writing, but the question was how? How can you teach flair? Four of us met to discuss and plan our ideas for this and this post outlines what we came up with and how we delivered it to students in the revision sessions.

Creating a 'Spring' Theory:
The biggest issue for A* students is taking a risk, of moving away from structured paragraphs like PEELA (Point - Evidence - Explanation - Language Analysis - Alternative View) and creating a more sophisticated and interesting essay structure. My own top set students are able to write excellent PEELA paragraphs in isolation but ask them to write a whole essay and somehow they lose their way; the coherence disappears and they end up failing to actually answer the question. 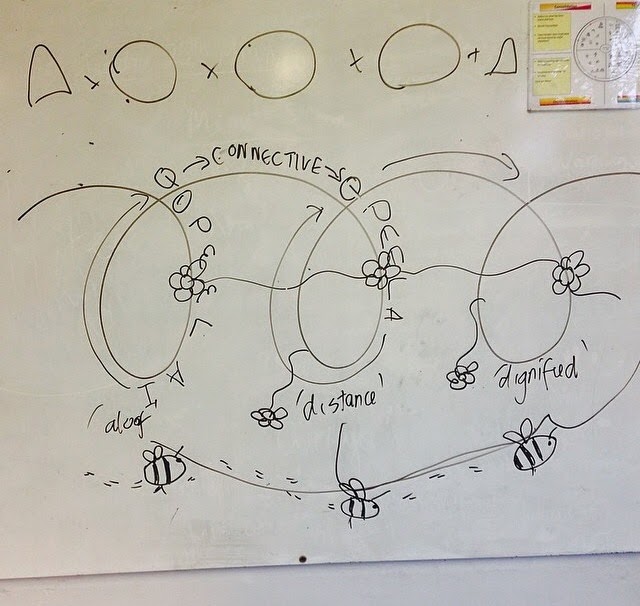 To share my concerns with the group I drew what their current essays looked like: 4 circles sandwiched between two triangles - each part complete on its own but disjointed from the rest. And, whilst our students are good at using connectives to 'link' their ideas, how effective is the word 'furthermore' if the point that follows doesn't link to the previous one? Despite being an English teacher, I couldn't quite articulate what I wanted their essays to look like so I went to the board again to draw my ideas. We came up with a structure that looked more like a spring with the essay being one complete strand looping around. These loops would take the form of their PEELA paragraphs but each one would need to link directly to the next (or former), not through the use of connectives, but by actually choosing certain points or quotes which could be referred to again, in a new and interesting way. And this is where we saw 'flair' come in, depicted through the use of flowers. These flowers could be alternative views or speculation or the effect on the reader. And then, to link these together we used bees (because bees pollinate flowers and therefore link ideas across the paragraphs). We came up with 3 different versions of the Spring theory which could be applied to the different English exams: prose, poetry and unit 1.

Hopefully, you can see from the PPT slides how our spring theory can help students structure and plan their writing. We worked hard to keep a consistent approach that could be used across texts but still with one aim in mind: clear, consistent writing which shows flair and sophistication. 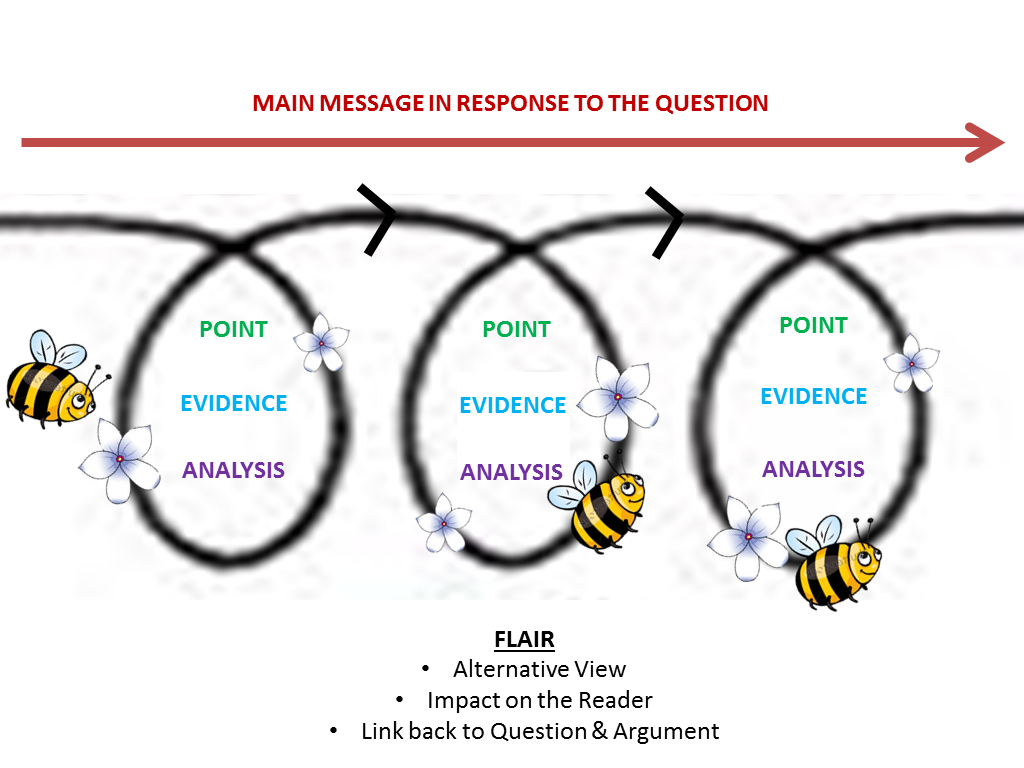 We then delivered sessions to students aiming for A/A* using the spring theory. Some  found the concept easy, one punning, 'it's the beesknees' (I was pretty impressed!) whilst others found it harder to use. The day allowed for students to plan different responses using the theory and this practice helped them in their planning, structure and writing. With one group who were struggling, I explained how the theory was like an electrical circuit, the flowers and bees each being equally necessary components, that if left out or removed would break the circuit and cut off the flow of electricity thereby breaking the flow of the essay and the engagement of the reader.

Here's what the teachers delivering the sessions had to say:

Alice Swain on Unit 1 Section B: 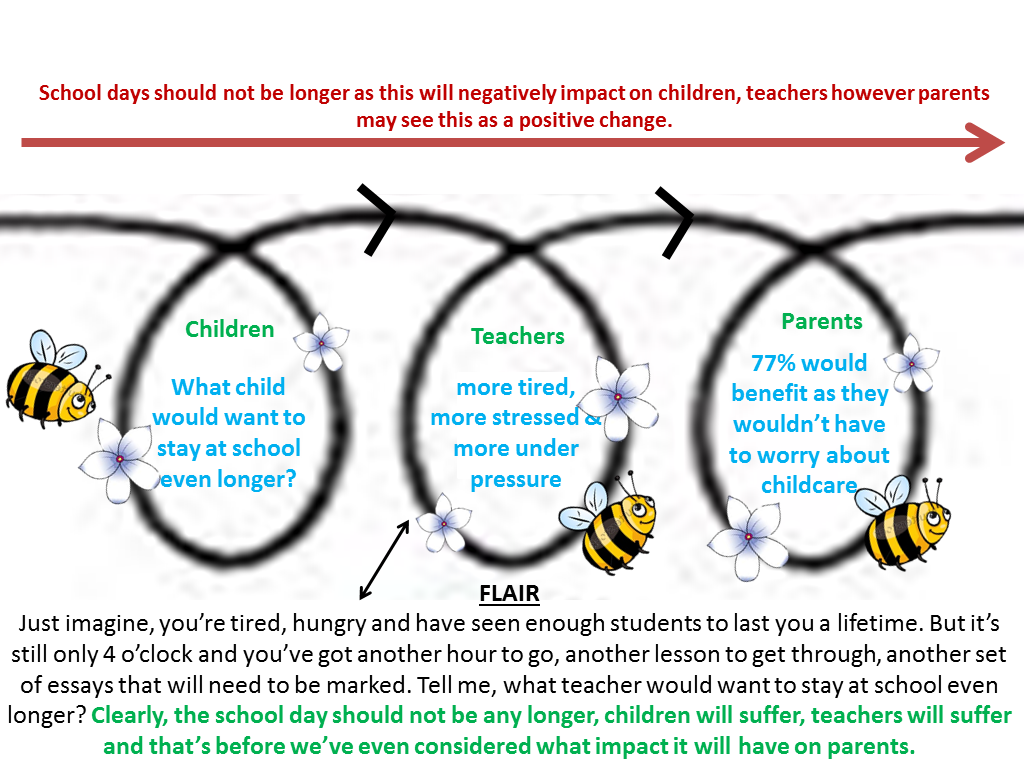 "When it came to planning a spring theory session for section B of the Unit 1 paper, it was difficult to consider how you could teach the theory and get students to adopt it to approach a creative task. Our focus for this section therefore fell on the three most important parts of the spring theory: the main argument, the flowers and our bees, placing an emphasis on encouraging students to use their AFOREST techniques in imaginative ways and consistently link back to their main argument. 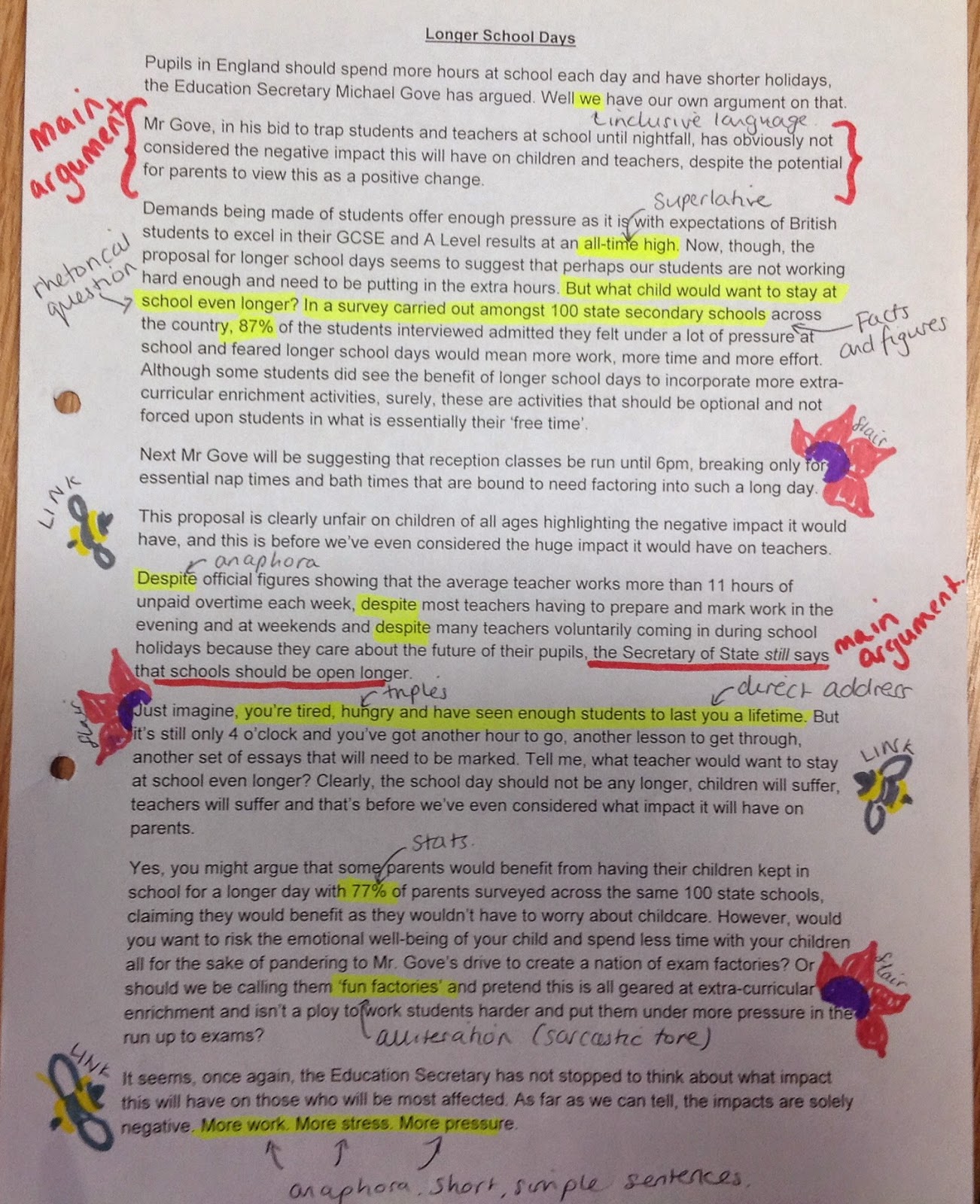 I started by writing an article myself, challenging Michael Gove’s proposal for longer school days and then we worked backwards, deconstructing the article together and exploring how the article posed a main argument which was consistently linked back to and interwoven throughout with the AFOREST techniques adding the flair. Giving students a model allowed them to see how an article or creative piece could be planned but still maintain a free structure as long as it considered one main argument throughout and discussed points which supported this main line of argument. From this the students then felt more confident to plan, in groups, their own spring theory preparing to write a persuasive letter to their local council arguing that the local youth centre should not be demolished in order to make way for a new Tesco.
Immediately the students identified three main groups (their points) who would be affected by this demolition, however, many of the students had failed to establish an initial main line of argument therefore running into difficulty when trying to think of their links between points and back to the task. The students then went back and re-considered their main line of argument, making it easier for them to look at their writing as a whole and plan a more coherent and logical piece of writing whilst still being able to write creatively. Their final plans provided an opportunity to showcase the spring theory as a concrete technique for creative writing tasks; one which students are more confident now using as a planning tool when approaching Section B." 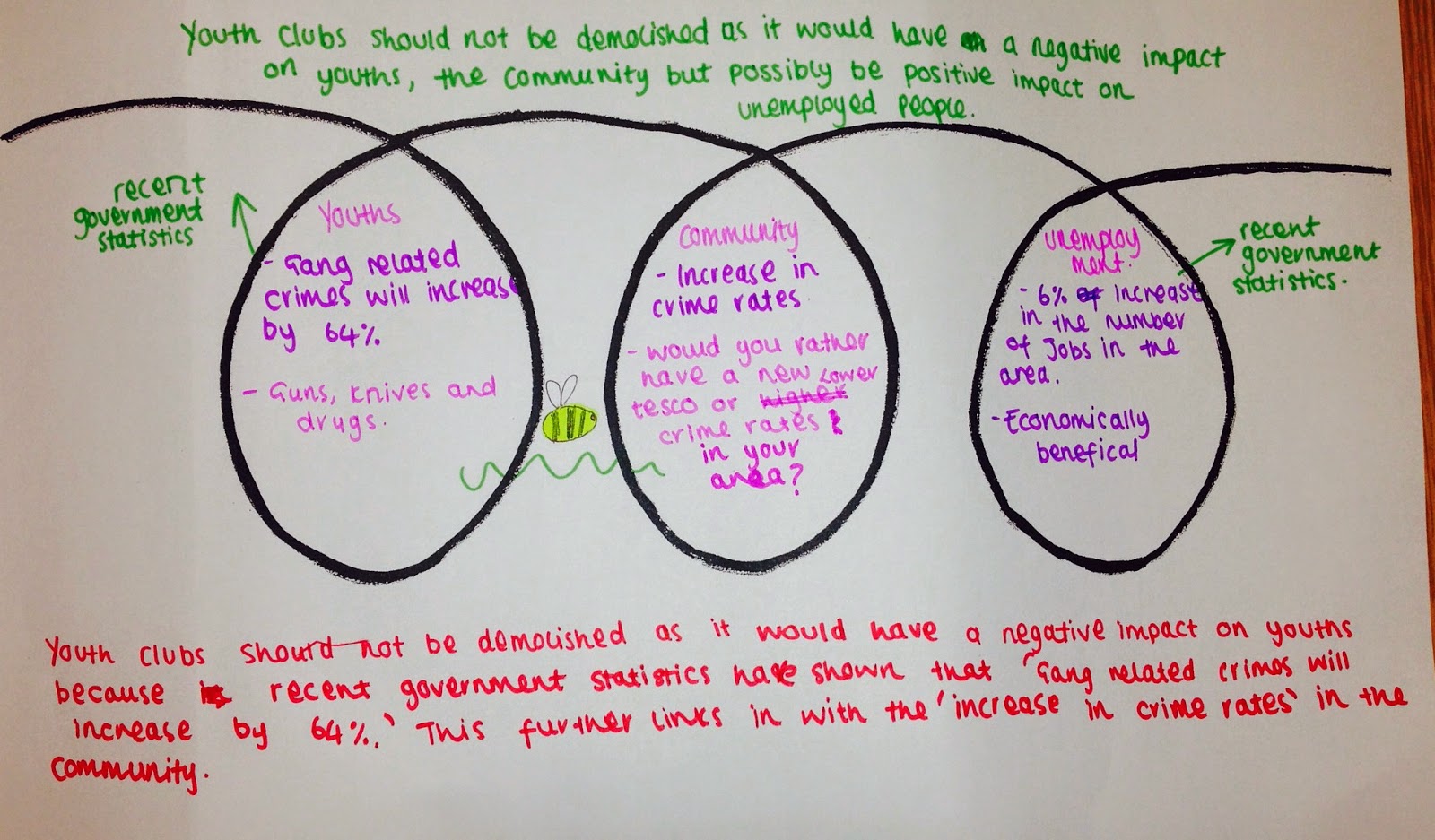 "As a group, we spent a significant amount of time discussing and developing our ideas about what we wanted to achieve in the A* sessions. We decided from the beginning that we did not want to simply revise content, but rather invest in developing the skills students would need in order to push themselves to achieve 'flair' and 'sophistication'. We also decided early on that we wanted a coherent system that could be applied across all different exam areas, over the entire day. I took on the session on Poetry. I wanted to spend time on both Section A (Conflict) as well as Section B, (Unseen), and decided to spend an equal amount of time in the session for each section. We began the session by applying the idea of Spring Theory to Poetry. We looked at one poem and applied the Spring Theory (specifically an argument/ point which runs through the entire argument, and thinking how to structure and analyse the points for their essay.) From this point we then used this to approach exam-style questions, which students worked on in groups. In the second part of the session, I assigned an unseen poem and also had the students plan an answer, again using Spring Theory. My conclusion is that applying Spring Theory was very helpful for the Poetry Exam. Instead of rushing in and simply beginning to write, it made students pause and instead spend valuable time planning and thinking coherently about their overall essay. This made essays much clearer with a more coherent structure. I am confident that students will be able to apply these skills during their exam."
Theeus Devitt on Modern Texts: 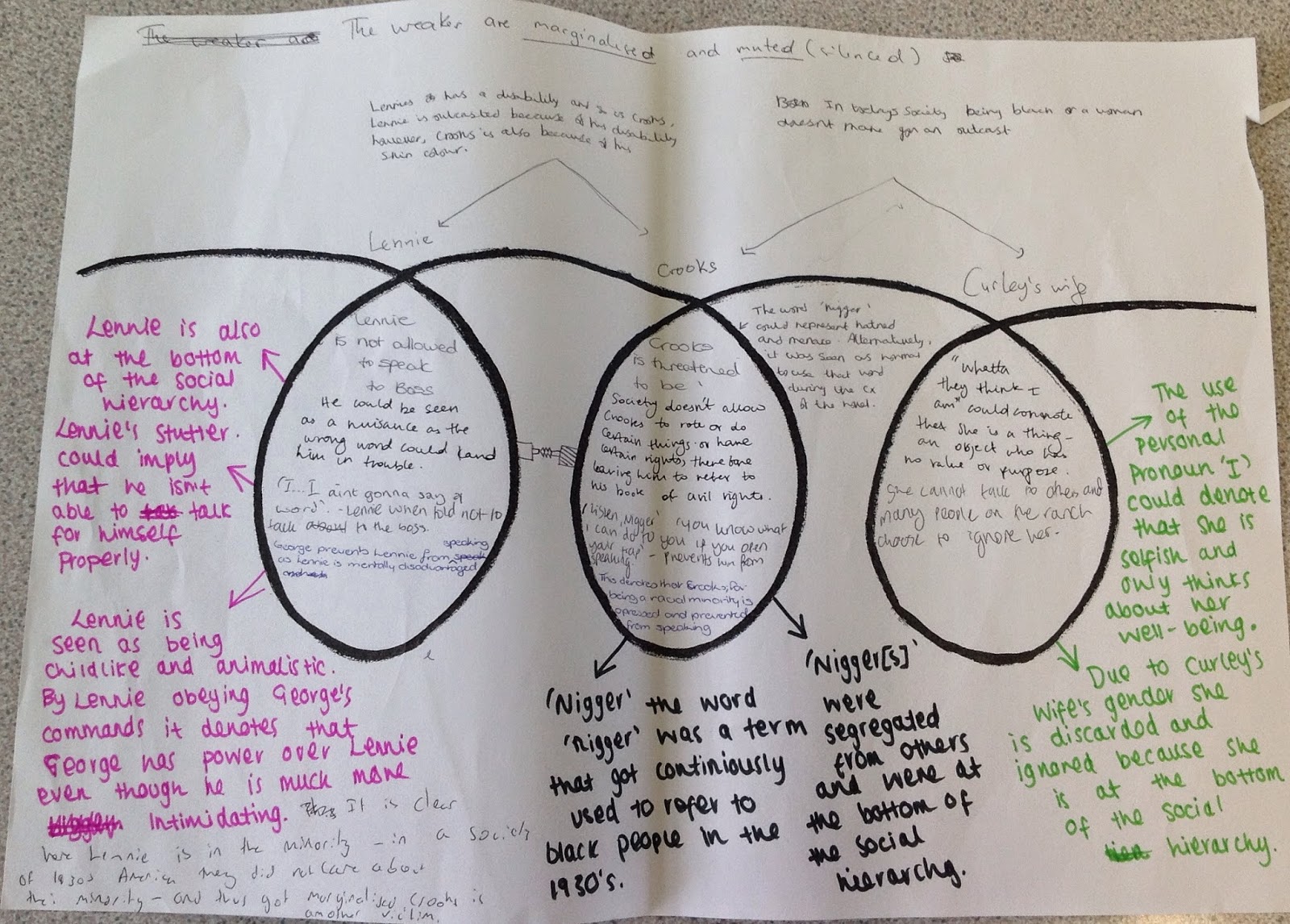 "Teasing the nuance of an A* from an A* student is one of the challenges most difficult to concretely master as a KS4 English teacher, so it was with a mixture of excitement and trepidation that I set about teaching the Easter revision classes with this newly devised spring theory. The session that I worked through was geared towards our students' two primary texts: Of Mice and Men and An Inspector Calls. The students have spent a long time studying both pieces of literature so their inability to achieve an A* was not a lack of knowledge, but the ability to expressive the knowledge in a cohesive essay robust with flair. 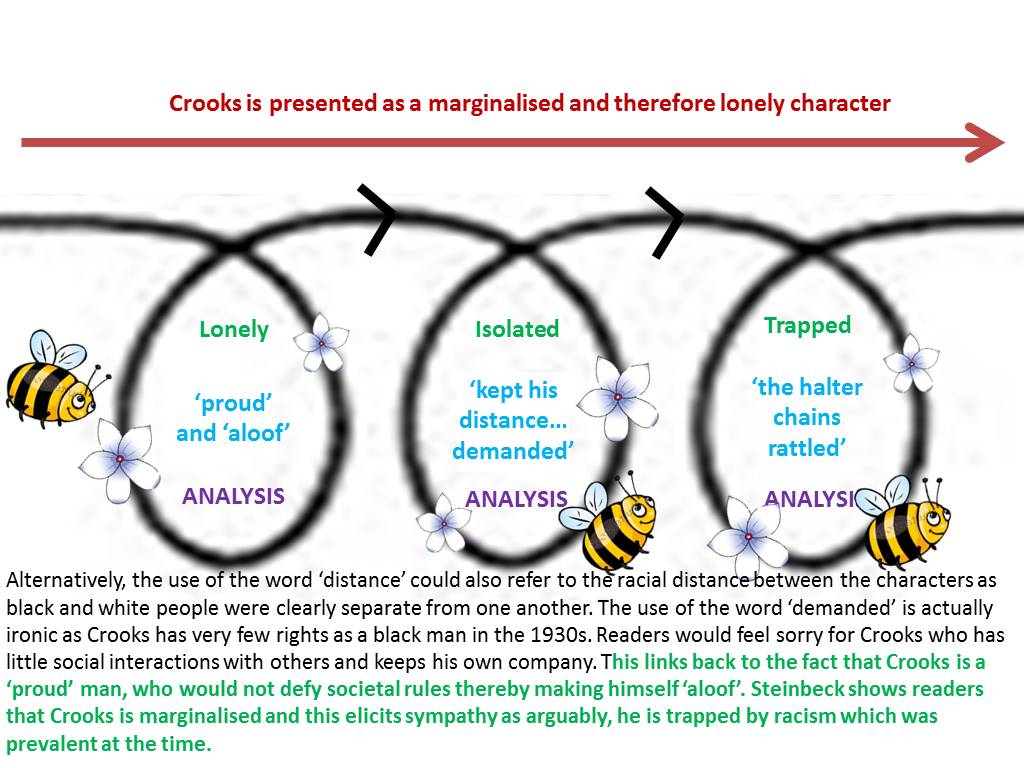 I decided the best way to do this would be to break them into groups and have four separate questions at tables around the room. Each group developed a main argument which was the backbone the essay for the question in front of them: the string that ran through the essay, as well as three points to support that argument which would make up the body paragraphs of the essay. Once this was completed, the students moved from their first question to the next table, which had another group’s question and essay framework: main argument and 3 supporting points.  As a group they developed the next stage of the essays which remained at the table by finding evidence from the text to support the main argument and supporting paragraphs. Again they moved to a new question and essay at the next table where they explained how the evidence gathered by the previous group supported the main point established by the first group. At the final table the students were asked to link these already constructed paragraphs to the main argument with flair. Then as a whole class we picked apart each group's constructed essay plan to see how effectively they had utilized the spring theory." 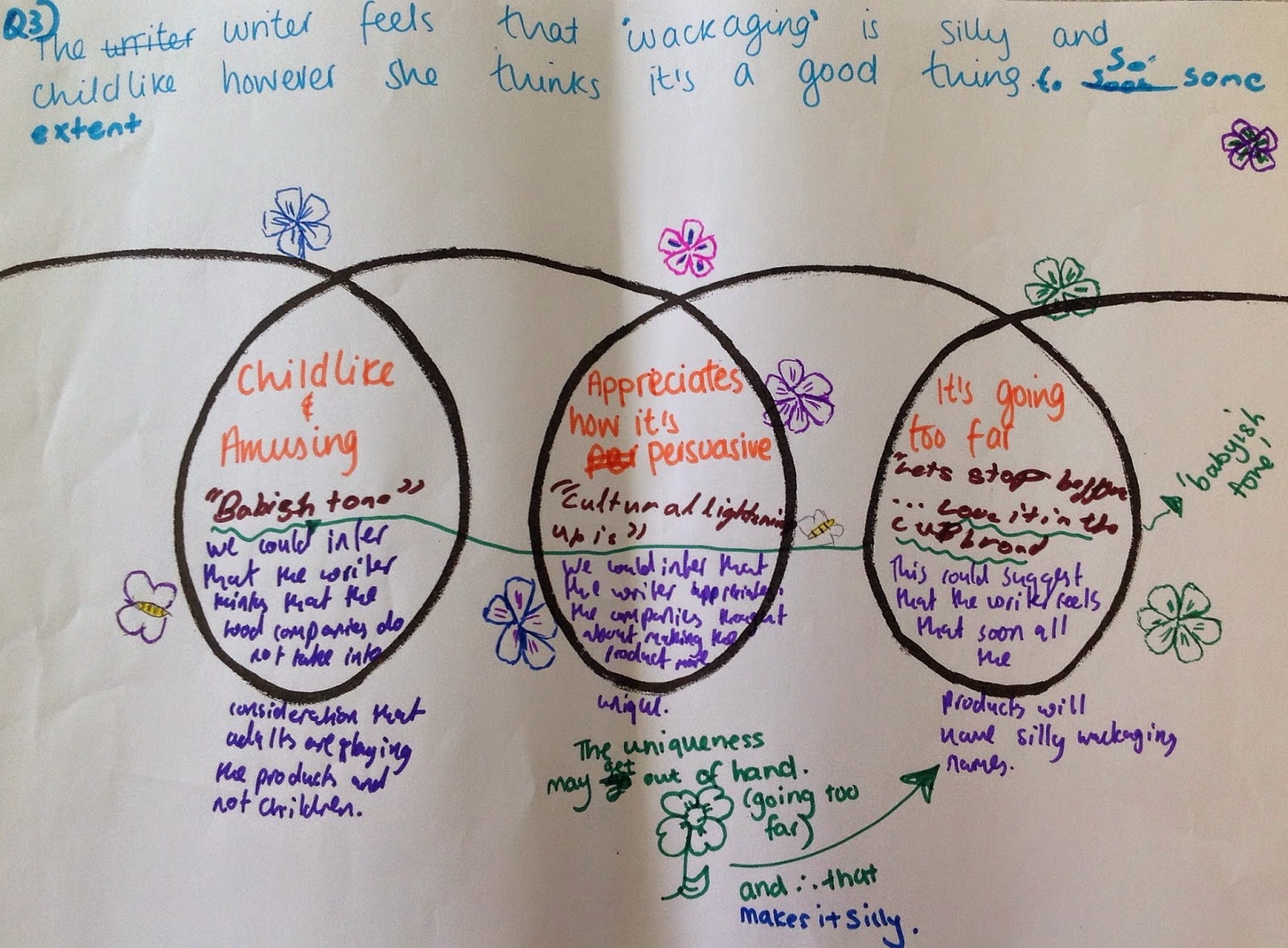 Since these revision days, students have been able to use the spring theory in their revision and essay planning. I have also used the theory to help show students how to construct their answers and see links that can be made between paragraphs including structuring shorter responses for Unit 1 Section A. Overall, the department have found the theory extremely useful, so much so, that it is something we are looking to introduce lower down the school across all abilities.