With Literacy being a main focus throughout the school we wanted to consider ways in which we can implement Literacy initiatives across the curriculum. With this in mind we decided to trial a project across two subjects who normally would not be considered to complement one another with the hope that we can improve and implement this project in the future.


We identified a key stage 3 class that we both teach and spoke at length about what we wanted the outcome to be and what students can take from cross circular learning.


The class we identified was a year 7 class and with their transition into year 8 imminent, we also wanted to consider an entrepreneurial angle to tie in with the enterprise day that the students would encounter in year 8.


Our initial planning phase began in maths lessons where students were given the opportunity to discuss their ideas on how they can improve the school. The class were divided into small groups (3 or 4s) and chose an aspect of the school they believed needed improving.

The Project in Maths (Harshini Selvendran)


70 have been enthusiastic, intrigued and been a pleasure to teach during the pilot project. We began by having a long detailed conversation on the potential improvements that could take place in the school. Estimating how much they thought it would cost and what obstacles would arise during the improvements. Period 5 on a Friday is usually disliked by teachers and a difficult period for students to concentrate in but not 7O, they were enthusiastic and full of ideas that even though we ran over the lesson and they were still excited. On Monday morning the following week I had students from 7O stopping me in the corridor asking me if it was ok ‘ to improve the canteen, to plant a flower bed, to put paintings in the hall’, they had left the lesson as was brainstorming all weekend without even realising.


The first brainstorm by 7O was ambitious. They wanted to get a contractor to break all the mobiles and re-build a new building in a ‘3D hexagonal shape’, I didn’t want to tell them this was impossible instead I created the classroom into an office, where each student had a role. I told them this is the first time this company will be working for Canons and will have to prove themselves so stay employed. One quiet voice from the back said ‘miss can we start small, like getting new chairs or tables’ one very confident voice said ‘but I want to create a new gym with new equipment’, the quiet voice replied ‘ where will you build this gym?’. The class stopped they were amazed someone so quiet voluntary spoke let alone argued their case. They all decided let’s start with something measurable and achievable that way the governors will be impressed.


Once the groups had decided their improvement area I sent them to the location in the school, they were given measuring tapes and each person in the group had an objective. They would measure the actual area in order to calculate pricing. They investigated the current conditions and how much improvement needed. They all came back to the classroom twenty before the end, exhausted they were ready to feedback. One group created a really good dynamic in the class they told us how many lockers they were in the school of what size and asked a few students what would be a preferable size. However it was not that which amazed me ‘miss the metal from the old lockers can be used in art or DT so it doesn’t go to waste’, one student did say ‘ can we make a car out of it’ and soon enough the class broke into a loud laughter and the bell rang.


They broke up into their groups and brainstormed further they estimated how much time they will need to investigate the cost and the suppliers that can be used. One person from each group fed back at the end of each lesson so other students can give their opinions and help each other move their project further. Following week I took the class into the IT room where they were given time to research any costings and draw a 2D plan of their improvement.  Many groups compared prices with retailers, calculated the total cost and then decided where they could reduce cost. They had clear justifications of their decisions. As weeks went on I saw the class evolve into a buzzing business office within four weeks it all came to an end where they took their cost listings, 2D plan and their PowerPoints to English.

The Project in English (Alice Swain)


In order to make sure the students took something away from the project, I knew that setting them up to work independently was integral to the project’s success. Having already conducted the necessary research in maths, students initially found it difficult to connect their work in maths to the tasks they would be completing in English, however, the groups’ final pitches proved that they understood and successfully linked their work across both subjects.


In English lessons, I wanted students to plan and write a letter to the school governors outlining their improvement plan for the school and then prepare and present a pitch to the class in order to persuade us that their plan to improve the school was the most feasible, productive and cost effective option. At first the students were apprehensive asking questions like ‘so Miss in our letters to the governors do we actually use numbers and stuff from maths?’ Yes, absolutely. I could see them starting to understand what we were getting at and from conversations with students they were beginning to see how two subjects that seem so distant from one another can actually sail with projects like this at the helm.


7O came to me confident and excited with the ideas they had come up with in maths and soon realised that they would need to master the skills they needed in English in order to make their project a true success. Without a strong letter and persuasive pitch, their idea wouldn’t come to life. We began by looking at how to format a letter and how to write persuasively, reviewing AFOREST techniques and how to use formal language targeted at a specific audience. When it came to planning their pitches, we watched some persuasive speeches together considering what was successful about them and then students spent time planning their own pitches trying to make theirs the most persuasive and engaging.


These tasks were particularly effective as it not only allowed us, within English, to consolidate and review learning from the Non-Fiction unit year 7s had studied at the beginning of the year, but it also allowed me to emphasise the importance of persuasive writing as the letter they would be writing would not be dissimilar to the task they would have to complete for part of the English Language exam paper at GCSE.


At the end of the week of English lessons we invited other year 7 forms to come and see 7O pitch their ideas and improvement plans. Over a double lesson, their persuasive pitches, confident calculations and the perfect mix of both numeracy and literacy assured us that the project had been a success, with the feedback from students only supporting this result further.


In terms of the students’ successfully achieving and attaining skills we have found that from a literacy perspective, within maths lessons, students are now better equipped to express themselves both verbally and in written explanations of answers. This has helped to bridge the communication in lessons between students and teachers. In addition to this, in both subjects the students had to consider their learning and apply their skills to a specific context with numeracy and literacy acting as the foundation for their success in the project. The students needed to come to English lessons with a knowledge of the numeracy and then apply this to a literacy setting, this encouraged the students to recognise the link between numeracy and literacy and the role it played in both their maths and English lessons. The students admitted they didn’t normally recognise if and when they were using numeracy in English or literacy in maths specifically so this gave them an opportunity to recognise how the skills are transferable across different subjects.


Luqmaan: “I truly enjoyed the project because it seemed so real. We didn’t use pretend measurements we actually had to go to the site we wanted and measure dimensions. Also, because of the pitch and how we used our maths, I actually felt like I was doing a job.”


Syed: “I really liked the project but I think it should have been more even because we have more English lessons with Miss Swain than maths with Miss Selvendran. I like that the teachers let us lead the project and didn’t interfere too much because it helped me improve my leadership skills I think.” 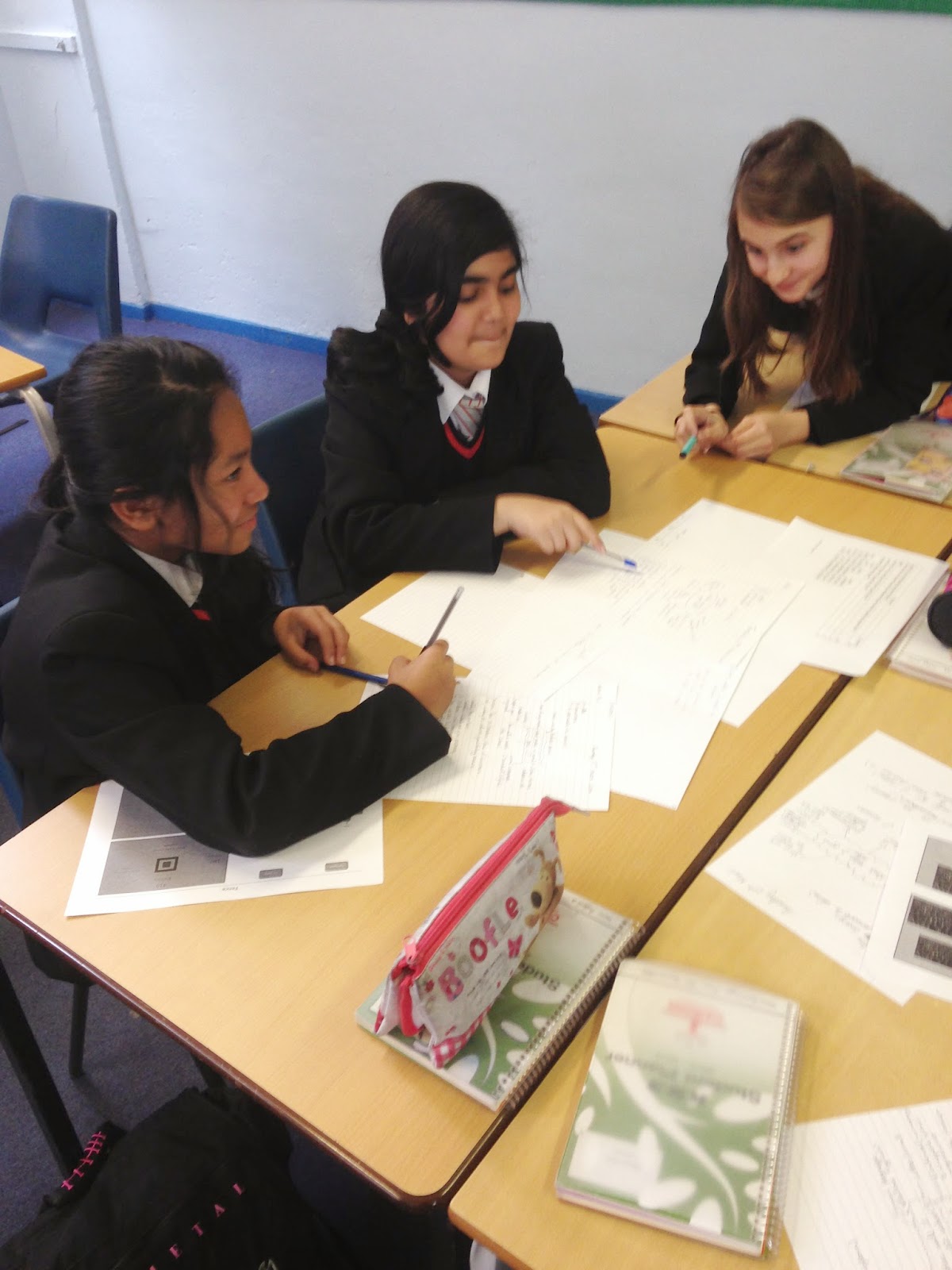 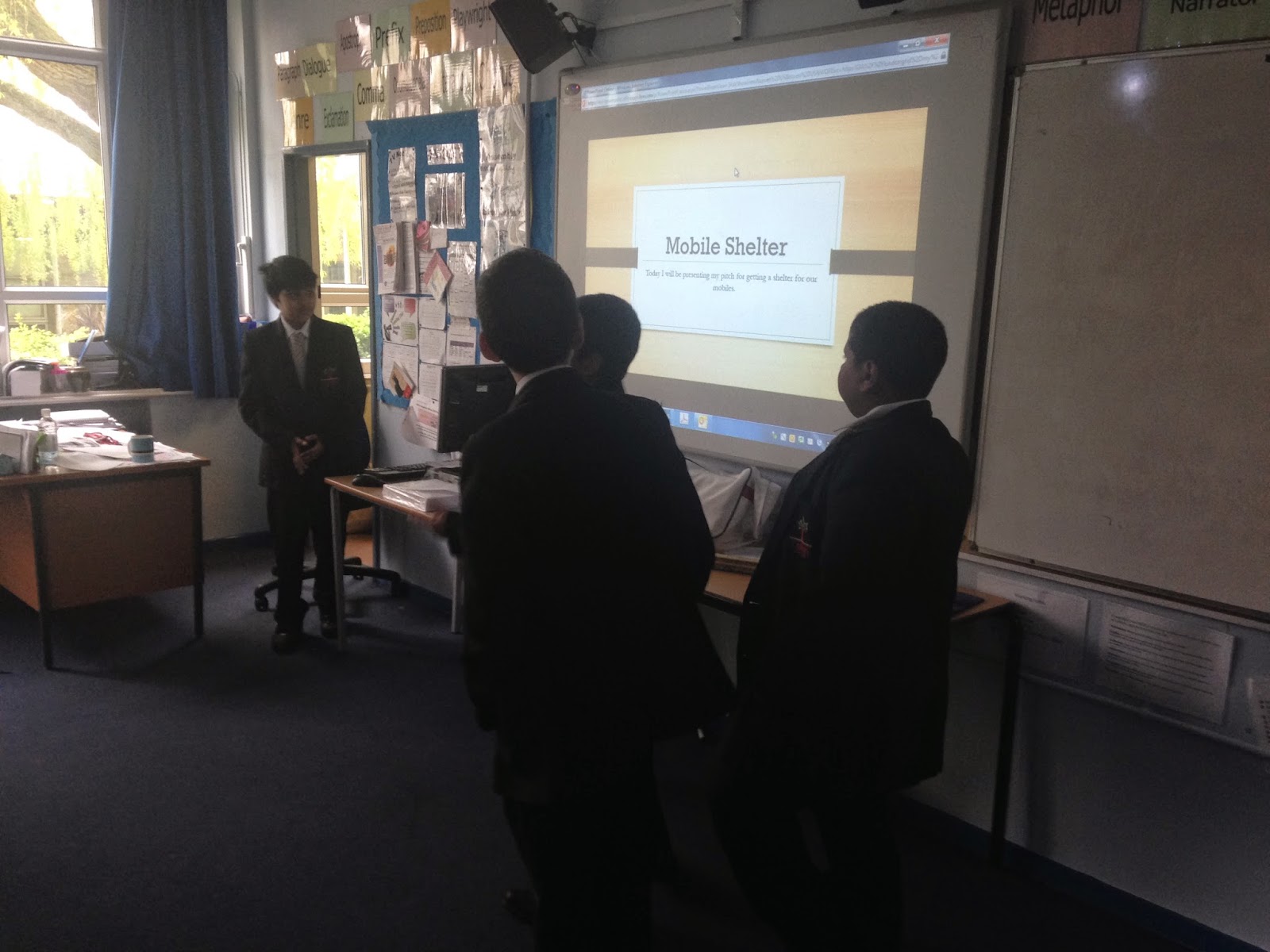 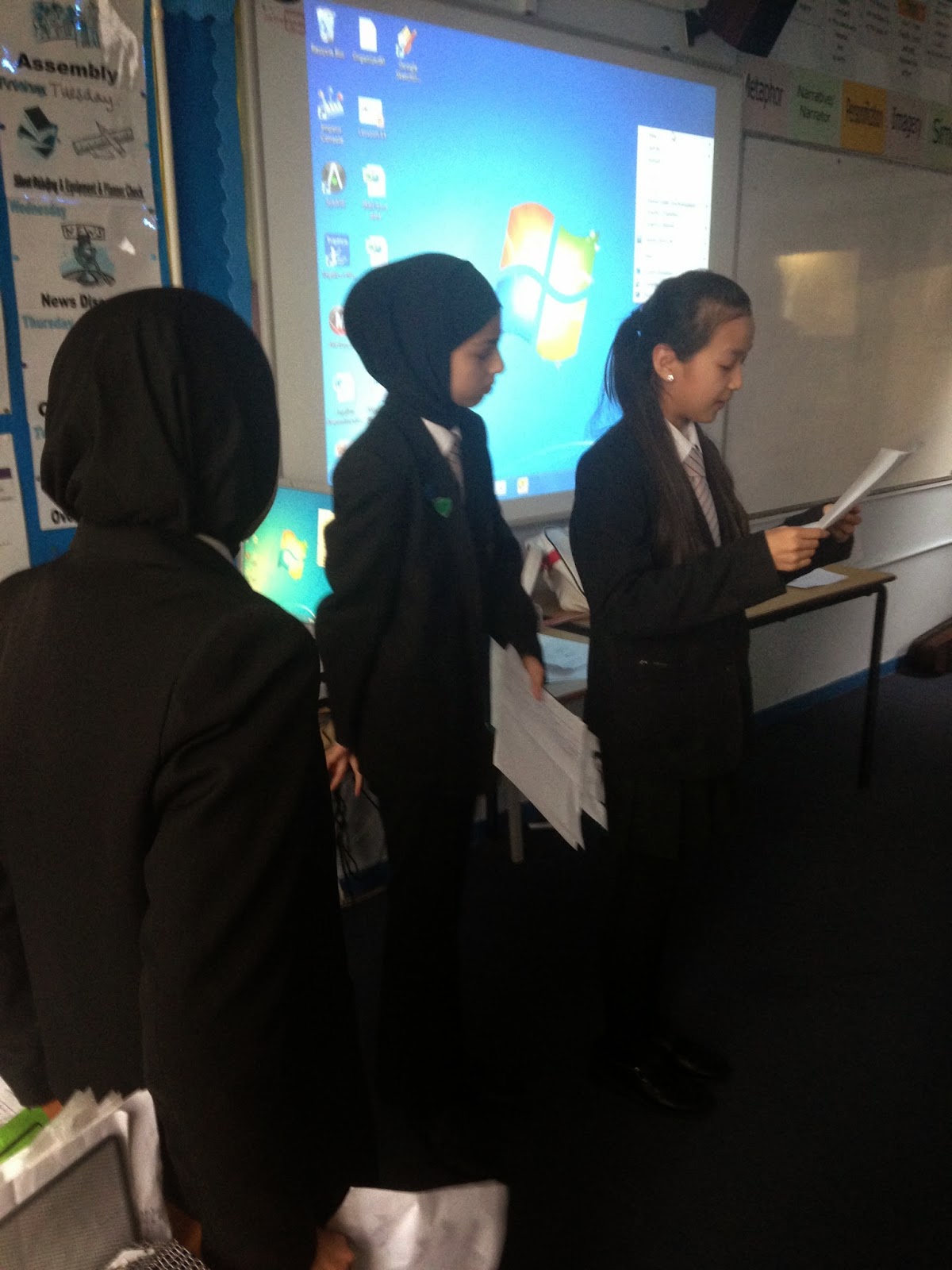 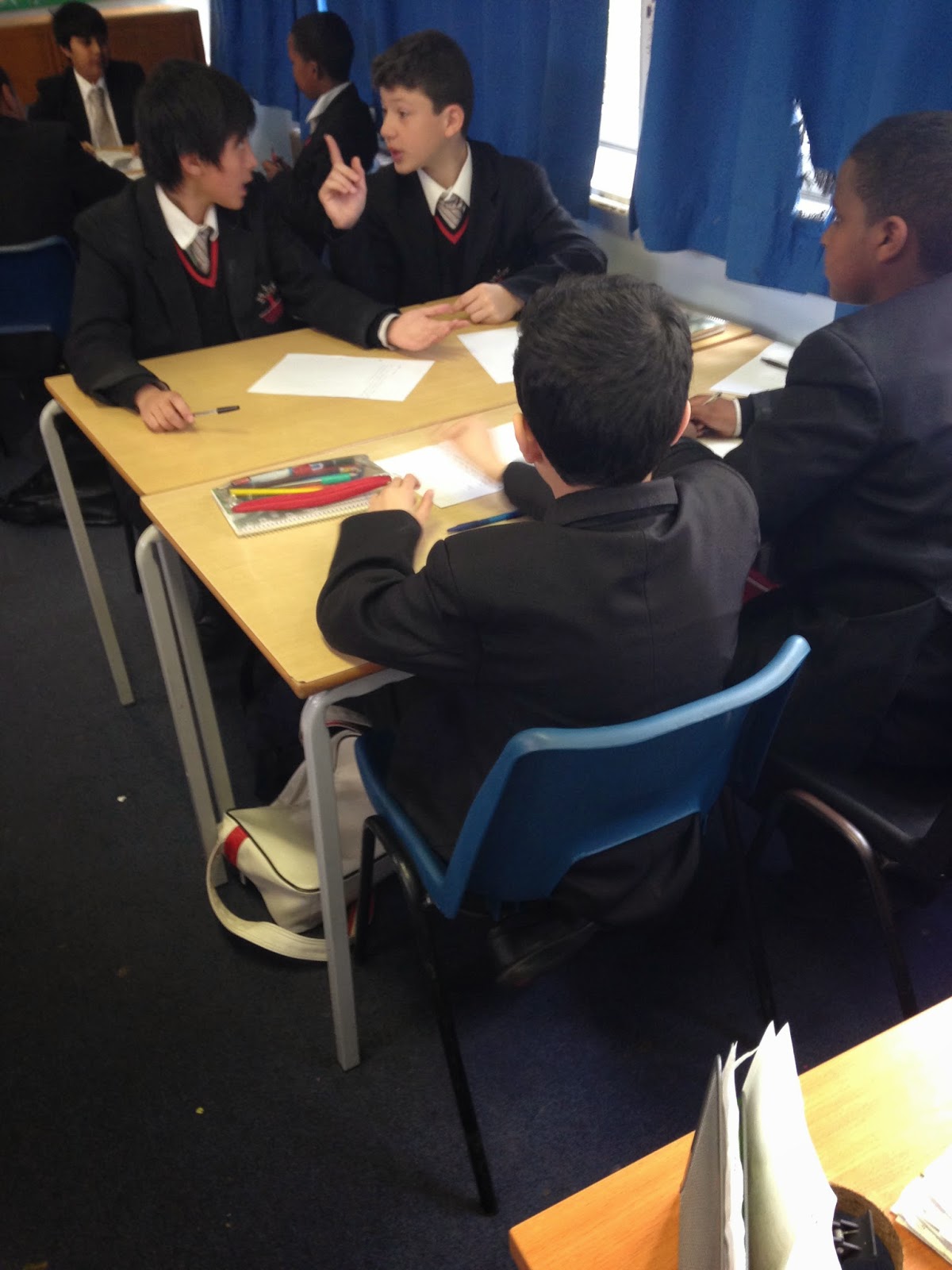