Adventures in pupil and teacher interdependence


Thanks for the feedback.


You are right the maths links were tenuous. It was more to see how they approached a whole-class task and to observe what roles students naturally took.  Also I’ve never tried one before so I wanted to bite the bullet and give it ago.  I also wanted to try it and contemplate how I could use it for a more mathematically rich activity it the future which brings me on to today…


Tried a whole group task again with my year 11s

This time much more maths focus.


We’d started the lesson doing surface areas.  Each as a group had to work out the surface area of the textbook on their table as they came in (4 min)


Next I put the pole in the middle of the room


Along with a ball of string, some rulers and calculators.

Task “ As a class find the surface area of this pole. Everybody in the class must have a worked solution by the end of the time” – 4mins.


I wandered around capturing answers and questions that diff groups asked on the board.  Wish I’d taken pics but I forgot.


Some of the kids responses that I wrote up on the board...


Really interesting to see how they worked.


A couple of kids took up the job of measurers – telling everybody else the relevant dimensions and some started looking up the formula in the textbooks to help their tables . Some just asked questions , which although they didn’t’ know it- helped to structure and direct the thinking of others and moved them forward as a class.


As a class they had solved it by the end of the 4 mins ( with no factual inout from me at all) and I used the questions that I heard them asking during the task to frame the discussion at the end.  Asking why the information that ppl had asked for was important etc and how it helped them to solve my problem.


Very pleased with how it went.


I really must return your pole at some point!


This sounds fantastic – I can’t believe you only gave them 4mins to complete the task and they actually did it!


In TLCs next week it would be great if you could share some of the experiences you’ve had so far but only if you’re happy too.


I’m currently trying to think of how I can do the Trajan’s column activity with my year 8 class but until then you can keep hold of the pole J - yesterday I had 10 sheets of A3 paper stuck on the windows and walls and had the pupils carouselling around writing quotes and themes from poems. Now, their filled sheets have been photocopied into a revision booklet – so simple, no planning and they did all the work!

Thanks for all your feedback and updates on group work.

I love that idea re a revision booklet.  I’ve been considering how to effectively  capture info from the whole class when they are working on separate topics and it was the one bit of negative feedback that my y10s came back with yesterday  when we did a whole class group thing.   Can I see it?  I’ve got videos that they made showing others how to do things but not sure where to put them.  The following class used them for revision and found them v helpful.  Is there some sort of school youtube?


I actually think there might be. There was definite talk of Keven having set one up – maybe ask him? It’s really useful to have it somewhere where students can access but also teachers so that they can see what others are doing and use ideas in their own lessons. Could you perhaps do a carousel after they’ve done their individual topics, maybe home and away groups or 1 pupil as the teacher going round to other groups and sharing what they’ve done?

Yep there are literally just 10 brainstorms into a booklet but you can come take a look. Doing the same activity on Thurs morning with lower set but I’ve put the names of the poems on the sheet as well so all they have to do is find the quotes.

Yeah, they are usually brilliant with their own bits but it breaks down when finding out from others if there are more than two topics as they get bored listening to each other (even when I do it in groups-rather than whole class feedback) I find the learning breaks down as they kind of just copy the answers after a while rather than understanding how it works.

Something I want to crack this year. They are used to being sent as experts or envoys to other tables during normal lessons though so I maybe need to develop that.

Yeah I know what you mean, they’re on board when they are the main focus but when they have to listen to others…I did home and away groups last week and the first thing they did was try to copy each other’s tables – I had to stop them and explain again what I wanted them to do.

I’d maybe focus on envoys and see how you get on. Perhaps you can add an incentive where the group judges their expert and vice versa on key skills like communicating ideas clearly, asking appropriate questions, listening etc…


Sending apologies re Mon, I've got leave of absence for the day so won't make the TLC. Or else would have been happy to share what I've been up to.


In the mean time I stole and amended your revision idea today.


" My year 9 and 10 are having a test tomorrow. Can you look at it and give them hints/ information that will help those who get stuck on the piece of paper I've given you?
Thanks"

I gave each pair a plain sheet of A3 paper and a copy of the test. Then they got on with it.


After a while they started writing things on the board ( without prompting from me) then near the end we discussed which info was useful and which wasn't , the reasons why and whether it was phrased in a way the other class could understand.

The finished article is attached. Really useful task as it helped my year 11s to revise too and the G and T kids were really challenged to explain things in writing in a way that was understandable to somebody of a diff ability ( who wasn't there with them).

I've asked Dan to photocopy it for tomo and will give it to my classes as a crib sheet during the test. Then I think I'll ask them to give feedback re how useful it was and how they improve it. 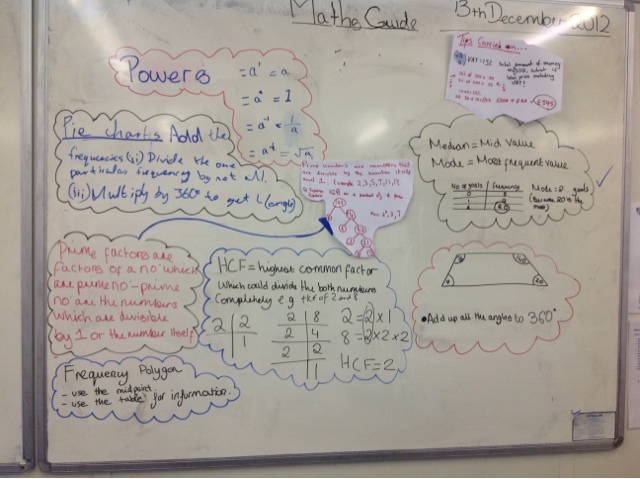 Sorry for not getting back to you sooner. Thanks for letting me know about Monday.

Love the way you used my revision idea – even better by then using the products with another class – shows how learning in one lesson can support a totally different lesson/year group.

Did they find it useful in the end?