"Miss, how do you do this every day?" - Making Students Teachers

Prior to half term I was asked to be observed with my year 11 class for Challenge Partners. As a pedagogy leader focusing on interdependent learning I wanted to make sure that the lesson reflected my interest in developing interdependence.

We were moving on to conflict poetry and I wanted the students to get to grips with the poems without having lots of input from myself. I have found in the past that teaching poetry can become very teacher led with little time left for exploration or deeper analysis. Considering that marks are given for sophisticated language analysis and alternative viewpoints, I felt that relinquishing control was the best way to go.

I was being observed at the beginning of a double period but I decided to set up the learning activity the lesson before. The connection activity in this initial lesson involved a race: students were in two teams (one pen in each) and had to race to finish brainstorms responding to the questions: 'what makes a good lesson?' and 'how do you learn best?' In a matter of minutes, students had filled their sheets and were confident in explaining the reasons behind their ideas. 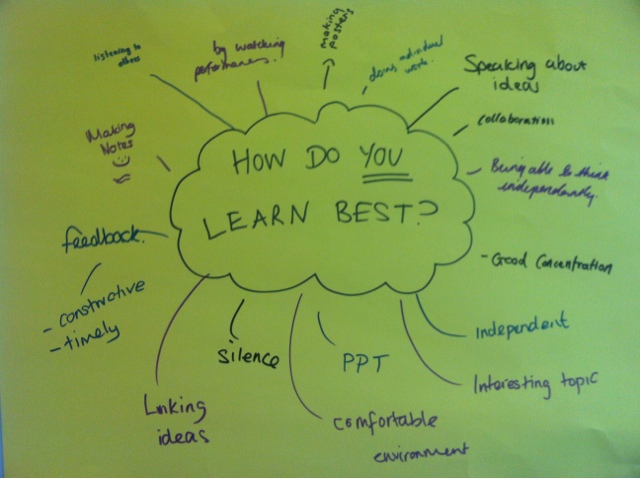 I then used these brainstorms as a springboard for their main task. I put them into groups of 3 & 4 and explained that they would be teaching the class a particular poem from the anthology; that they would have to create a 'lesson'. First, I asked them to allocate roles which included, but were not limited to, chairperson, scribe and researcher. Once these were decided on I gave the groups their poems (which they had not come across before) and asked them to start annotating. With no input from myself the groups started reading their poems and began to highlight key words and language techniques. As I worked the room I was able to question groups and discuss themes and feelings. At this point some groups were clearly confused - they hadn't expected the lack of input and knew that they needed to work hard if they wanted to understand the poems fully, let alone teach them to the rest of the class!

Then came the observation lesson. I started off reminding the class about their brainstorms from the previous lesson. They were now stuck to the board as I wanted them to keep these ideas at the forefront of their planning. Next, I asked the the groups to set their own objectives for the double, which included tasks such as finishing annotating the poem, creating presentations and producing role-plays with some as simple as ensuring the message of the poem was understood. These objectives were not directed in any way by myself. I wanted the groups to self-regulate their own work and progress (Boekearts, 1999) as opposed to receiving the external regulation (teacher direction) which can become so common in GCSE English. I believe this is a learning process in itself, encouraging pupil to pupil dialogue where they have to listen to each others' ideas, discuss priorities and come together to agree on appropriate objectives as opposed to me simply telling them what to do!

During this objective setting time, it soon became clear that some groups had researched more than others and some still needed support. My only input was to give each group a basic annotated version of the poem taken from the AQA support guide and allow them to use it as a support mechanism for their own ideas. Once they had access to this I gave them 10minutes to add to their own annotations before I asked them to re-evaluate their objectives and set more to replace those they had met. This took us to about 25mins into the lesson. I then gave the class another hour to plan their 'lessons.' The room was soon buzzing with discussion, role-play practice, YouTube clips, dramatic readings and PPT creations. The groups were focused and were working collaboratively. I stopped them a few times to re-assess objectives but actually, it wasn't necessary - the groups were working towards a common goal and knew exactly what they needed to do to get there. The pace of activities may have been slow but the pace of learning was the focus and the learning was clearly evident. Poaching a term from @kevbartle learning that was 'SID' was the key with challenge and progress over time being more valuable than instant knowledge. Only through activities such as this could the poems be explored fully, investigating interesting alternative views and questioning the meanings and intents of the poets themselves.

At the end of the double the students filled out reflections sheets independently. They commented on the process of working in groups, on what had gone well and what they'd do differently/better next time. The time given to this writing allowed the students thinking time, there was no discussion, no talk, just pure reflection. But how is this collaborative learning? I think that the process of reflecting on what they had done allowed them to realise what was still to come and allowed them, not only to acknowledge their successes but also plan for the future. After all, the planning was done, but what about the delivery? 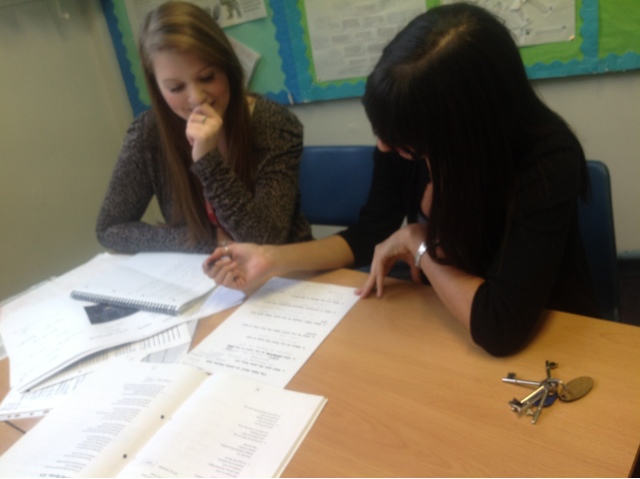 So, how did their lessons turn out? Fast forward one week and they began. The first group started well but struggled to maintain focus and attention, needing my input on occasion to keep the momentum going. Through their hard work and determination (and bribing their peers with sweets) they even had me getting involved; teaming up with an ST to compete in a quiz on the poem!

The quote of that day was 'miss, how do you do this everyday?' Not only had a group of 15 year olds just taught a complex poem but they had also realised the difficulties and challenges of teaching a class who needed constant motivation, support and guidance. The second lesson went better; a group with only 2 members (their 3rd member off sick) had the whole class annotating and discussing the poem 'At the border, 1979' for 40minutes! Not only had I not had to utter a word but neither had they. They had managed to become 'lazy' teachers themselves and told me the point of their lesson was to get everyone else to do the hard work - exactly what I'd had in mind when I planned mine.

5 more groups have delivered so far with 2 more to go. Not only are the lessons themselves going well but the skills that the students are developing are crucial to their success in their exams. Having sent them away on Monday to annotate 'Come on, come back' they arrived on Thursday with lots of notes and even more ideas, exploring deeper layers of meaning and discussing the themes of the poem from both a contemporary and current point of view.

Interdependence has been the key for this class. Through truly collaborative work they have been able to produce and deliver lessons which are exceptional in content and outcomes, proving that 'group work' really can produce the goods.