What has football got to do with geography? Low teacher - high learner impact

As part of my professional development this year, I am focussing on the  'Interdependent Learning' key theme of the Canons Pedagogy in my Teaching and Learning Community. Under the supportive eye of @apitsillis (Pedagogy Leader and co constructor of the Canons Pedagogy) my primary aim is to improve the group learning I teach to ensure they result in better learning outcomes for students.  Interdependent learning is  a part of my classroom practice that I enjoy most, but if I am honest not an area of my practice where I can evidence that the students were getting as much out of it in terms of  their learning, as I was putting into lesson with regards to planning.

If I am brutally honest with myself the norm for these lessons were that I would arrive to the class exhausted, having created a vast array of resources, laminated everything in sight and still of course forgotten the glue sticks or scissors. The students would complete the tasks, some might appear to enjoy the experience however, as I observed each group I had spent two hours carefully constructing I would still witness one or two students sitting back whilst others did most or all of the work.  I was never totally convinced that these lessons achieved what I beleive should be the long term aims of group learning; encouraging students to learn how to learn from each other and gain increasing independence from me as their teacher.  As I am reminded from time to time by @7tbj aka John Connolly (Pedagogy Leader),  are we  the 'sage on the stage or the guide on the side?' If I am honest until very recently I have been the sage in these lessons.

So having posed the question 'what has football got to do with geography?'  my year 8 class began to  map the orign countries of foreign football players in the English Premiership with a view to then discussing why these players choose to come to the UK. I asked for experts and six hands went up. Five boys and a girl. I then stood at the front of the class handing out blank maps and watched as students collected these and then gravitated towards one of the self nominated experts forming groups which varied in gender, ability and size.

It was a pleasure to wander around the class and hear the following comments and questions. 'Do rich countries have worse players than poor countries?'  'He's African so why does he speak French?'  'Why do so many good players come from South America?' and 'Why has John Terry never played abroad?'  As the groups progressed through the exercise a more competetive element began to emerge as students tried to name more payers than their peers, exchange answers for information they didn't have and negotiate 'loaning' experts that were more knowledgeable about players from a particular continent. As they mapped I was able to voice their discussion questions and invite those who could provide answers to do so. As with religion and politics football creates heated debate and I listened to students argue about the rights and wrongs of some parents viewing football as a way out of poverty for their children in some parts of the world. As the groups celebrated and congratulated their 'experts' they moved onto a discussion around the reasons foreign players were attracted to the English premiership. By that stage they had already built up a wealth of knowledge from their questions, conversations and debate and could rapidly begin to form reasons for player migration. 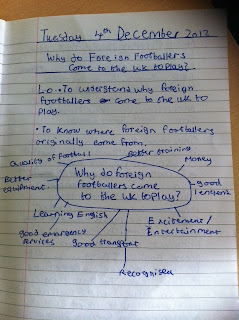 Keeping planning focussed and simple resulted in four recognisable improvemenst to my practice.
1.  Self selecting groups proved to be effective in this instance.  Variation in group size, gender and ability made no apparent difference to student acheivment and certainly didn't affect the lesson in an adverse way.  There are times when groups need to be carefully constructed but why do I get so hung up about working like this all the time?
2.  Students who  had never  volunteered to lead learning were keen to do so.  Of the six experts four of those were students who often find it difficult to focus, concentrate and stay on task. Five of the experts were boys.  In the past from this class the norm was for  the girls to emerge as natural leaders. Their leadership of their own learning and that of their peers was 'real'.  They directed the conversations, posed and answered questions and kept their groups focussed
3. Because the groups were so engaged I didn't feel urgent intervention by myself was necessary.  I was able to sit back, observe and 'dip' into each group at just the right point.  Facilitating rather than directing learning
4.  Independence and interdependency was evident. Students learnt from each other and not a single question was targetted at me.  Okay I'm not an expert in football but that had never stopped them in the past!
I believe that children learn more effectively in group learning situations.  Group learning enables students to become more effective learners; learning from each other and understanding what to do when they don't know what to do.  In this example I can argue that because many of the students had more football knowledge than I did, it made perfect sense.  There is a place for lessons where resources are expertly prepared, groups are carefully constructed and each student has a 'role' however I have found when I become a 'slave' to always planning in that way group learning  quickly becomes unsustainable, and I  plan fewer lessons because time becomes the 'killer'.  Keeping it simple has meant that I have had to relinquish a lot of control, remember the start of the lesson  may be chaotic and accept that students may take the learning in another direction.  The benefits are that I am able to teach more group learning and students are starting to emerge as 'real' leaders of their learning fuly engaged in every step of the lesson.  Well done and thank you to 8G at Canons High School.