On Monday this week the results of my Dissertation (and therefore final Masters level) were released by Middlesex University. When I finally was able to logon to the unihub portal - the first time I had tried in my three years on the school-based programme - they only gave me my mark and didn't say what level of award it was equivalent to. I had a hazy recollection that it was in a handbook I had been given and so I looked it up and there, to my utter surprise, was SOLO taxonomy staring back at me!!! 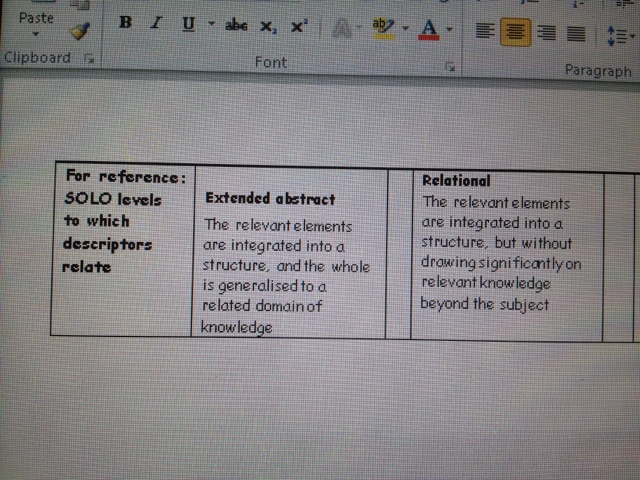 To say I was stunned is an understatement. Although SOLO wasn't a part of my dissertation's conclusions about what good assessment should look like, I found my way to it immediately after thanks to @biomadhatter, and the way SOLO dovetailed with the conclusions of my research was serendipitous in the extreme: it was as if my findings were preparing me for the revelatory nature of SOLO in action. But what shocked me was the fact that the same levels of understanding I had been teaching Y7 English and Y12 Sociology students to apply to their work were being used at Masters level to distinguish between a distinction (extended abstract), a merit (relational) and a pass (multistructural).

Just the previous week I had launched SOLO with my Y12s in a lesson where I got them to highlight their A2 mark scheme for AQA Sociology according to SOLO taxonomy (see my post 'Keeping up with the Soloists'). The results were crystal clear; that extended abstract was the top band, relational the top half of the middle band, multistructural the bottom half of the middle band and so on. This was a powerful lever for me in getting students to appreciate the value of SOLO.

And so, being a fan of serendipity, I decided to use the Middlesex university mark scheme for Masters level dissertations to mark my AS Sociologists' essays, rather than the A-Level mark scheme to see if it would work as well. The results were amazing. 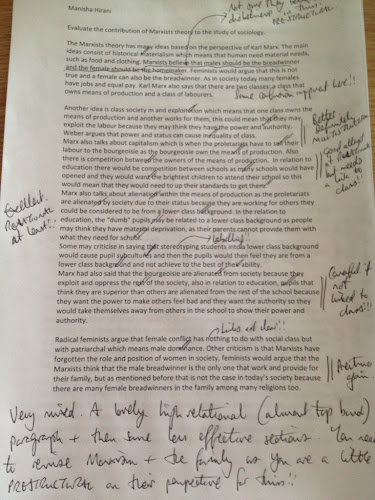 The first of the essays I marked was a real mixed bag, which using a traditional mark scheme would have been really difficult to evaluate. Because I would have been looking at a number of the different mark bands I would have had to cobble together a best fit statement that would have offered little to the student. Instead I am able to point out where she is prestructural, but also where she is multistructural and, at her best, relational. My concluding comments are therefore far more effective at giving her feedback, feed up and feed forward: a proper evaluative response for her to draw strength from and use to identify improvements. 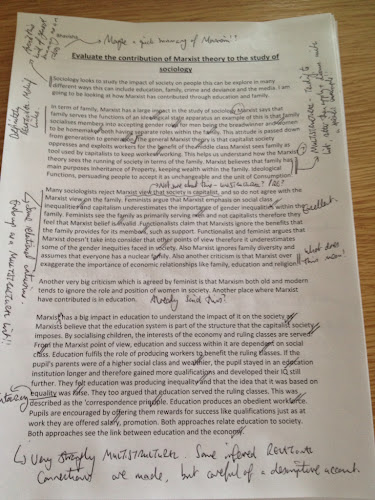 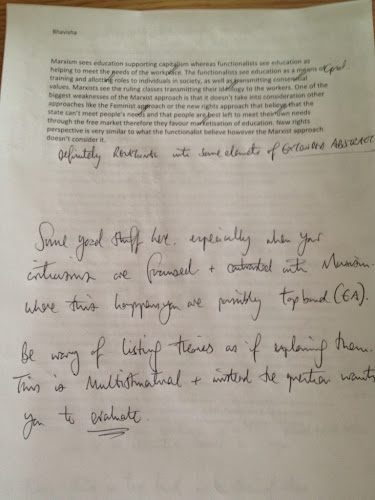 In this second student's response there was far less variability of understanding, and so I was able to focus my feed forward on moving up from multistructural in certain places, to secure a fully relational response as a springboard to aiming at completely extended abstract thinking (I'm hopeful of her achieving an A grade next year, and so this mark scheme fits very well with her targets for the coming year). 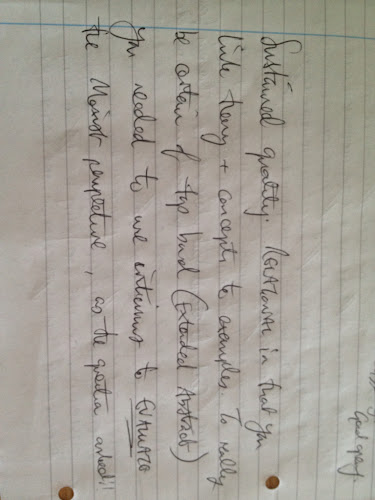 This final example is a close-up on the feedback, feed up and feed forward I provided for a third student who has the potential to achieve a grade A or even A* next year. Although I can see things that I might do differently (it was my last lesson with them and I had to mark these essays as they worked interdependently) the thing I am most pleased about with these evaluations is that I found writing the positives and negatives equally easy. When using the A-Level mark scheme I always find that I operate on a deficit model with students, pointing out all the faults whilst finding it hard to look back and see the achievements.

The difference that I have noted from this first foray into using SOLO taxonomy for written evaluation (notice I am not using the word assessment as it seems too shallow for the feedback, feed up and feed forward I have given) is that I am able to evaluate each paragraph and even sentence independently of the whole. This precision of evaluation has allowed me to really accurately pinpoint which concepts they have not grasped, or where they have not applied theory to sociological contexts, or where they have failed to evaluate sociological theories effectively. In doing so, it has helped me to promote the importance of consistency across the essay to them and they were quick to identify sections where they needed to go away and revise concepts or rewrite essays. If I had had more time with them I would have asked them to rewrite the section they felt most able to improve, perhaps after having spent time getting ideas from their peers based upon my evaluation.

I told the students afterwards that I had marked their essays using a Masters level mark scheme. What amazed them most was that SOLO taxonomy could be used to evaluate their work as well as mine, as well as GCSE coursework and as well as KS3 portfolios. It was clear that they realised that thinking about levels of understanding (as exemplified by the SOLO concepts of Extended Abstract, Relational, etc) was something that could connect them to their studies beyond A-Levels, and the fact that they were realising this in our last lesson before their UCAS preparation week was not lost on them, or me.