Seeking Authenticity in Theory and Practice

Last night @informed_edu posted a tweet that said "Grrr. Every time someone in an education discussion uses the word 'authentic' a small part of me dies.... There's very little left now". This made me genuinely curious as I have full respect for his views expressed on Twitter but I am also one of those regular users of the word 'authentic' and I don't really want to be responsible for his slow death. I sought some clarification of why he so hates the word and got the response "I feel that 'authentic' is jargony, vague and inexplicable... Unless you're talking about an old painting". Fair dos I thought. Everyone is entitled to their opinion and the joy of social interaction, including through twitter, is the differences between us not the similarities.

And I could have left it there. And I would have left it there. And maybe by the end of this post you'll think that I should have left it there, but since using a phenomenological methodology for my Masters dissertation I have become fascinated in unpicking jargonistic concepts through exploration of the etymology of the words used to express them. There is an amazing amount of power generated by this process of revealing the original and varied meanings of words we take for granted and it was clear to me that I too had been taking the word 'authentic' for granted when I thought about @informed_edu's tweets (I gave the rather weak answer of 'authentic' being an expression of the inexpressible that must have made him die just that little bit more). So this morning I have had a dig into the rich soil of the word and been once again enthralled by the fossils I have found down there.

The first thing of note is that the modern notion of 'authentic' as meaning genuine or the 'real deal' has no etymological link, so let's dismiss that immediately as the thing that @informed_edu was being killed by. Instead the next most recent etymological incarnation of the word (from 13th century French) is to express a feeling of the 'canonical'; of something being 'original' or 'principal'. Now let me be honest with you here: I do love it when something I value as an ideology can be traced back to the word canon because it offers me as a Senior Leader of a school called Canons the opportunity to express our values ever more powerfully. We do strive at the school to be 'original' and to be a 'principal' (as well as principled) body within the community we serve and so are, in this derivation of the word 'authentic'. Similarly we ask our teachers and our students to be original in their thoughts and deeds: to absorb the many different ways in which people do learning and produce something that is authentic to us as a learning organisation, a Canons Pedagogy rooted in our very specific context.

In the next, ancient Greek, layer of the linguistic heritage of the word 'authentic' there is an etymological meaning of "one acting on one's own authority". In other words for a school to be authentic it must make decisions by itself and for itself, weighing up the strengths and limitations of an external accountability agenda, but not being weighted down by it. With rapid expansion of academies across the secondary sector in particular, and the opening up of those freedoms promised under it - not to mention the mothballing of the National Strategies as a what-to-teach-and-how-to-teach juggernaut - this vision of authenticity as "acting on one's own authority" has never been more relevant and more necessary. Even Ofsted are saying that there is no single type of lesson they want to see. We appear to be being given permission by all the key players to be authentic in our pedagogy, so let's take them at their word as teachers and school leaders. At Canons we are demonstrating this by investing heavily in time, resources and enthusiasm to develop a shared understanding of core structures and techniques that can underpin our Canons Pedagogy. We are striving to empower our teachers - both experienced and inexperienced, progressive and traditional - to lead in the identification, explanation and verification of these core structures and techniques so that our Canons Pedagogy is authentic at a personal as well as a contextual level.

The final and original etymological meaning of the word 'authentic' is listed as being "to accomplish" and "to achieve". Schools, their leaders, teachers and students need to have an end product to their activities if they are going to lay claim to being authentic, whether this is measured by the dominant performance measures of examination success and Ofsted recognition or by the so-called soft achievement outcomes of learner roundedness, exemplary citizenship and communal interdependence. At Canons we have had significant recent success and progress against the 'hard', DfE-recognised accomplishments and achievements, but the dominant ethos of the school has always overwhelmingly been built upon the 'soft', community-valued accomplishments and achievements. Marrying these two together in a Canons Pedagogy that values the former very highly but never forgets its fundamental duty to enable the latter is what the Canons Outstanding Pedagogy Project (OPP) has been all about.

In using the phenomenological process the word 'authentic', which some find so troubling and which I have used rather lazily in the past, has this weekend become much clearer and more tangible to me. 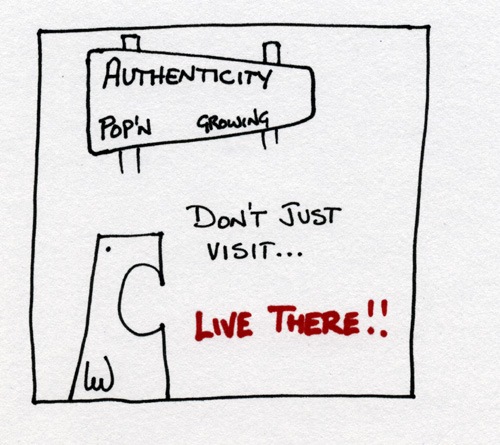 From now on when I use the word authentic about an institution I will be talking about it as being so original in its thinking and acting that it plays a principal role in the system it serves. It will be an institution that uses these thoughts and actions to be self-authorising and self-validating, respectful of external agencies and their evaluation but never slavish to them. And it will be an institution that enables all of its people to accomplish whatever they set their minds to and achieve success in all of the ways that it can be measured.

Now that would be something worth living for.

Posted with Blogsy
Posted by Unknown at 02:19