From the Theoretical to Empirical using SOLO Hot Maps 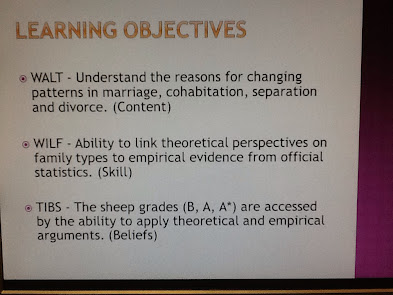 Today was the day of my observation for our Whole School Review process with my wonderful Y12 Sociologists. They are a great class for this subject: opinionated, argumentative, personally informed and happy to share pertinent information about themselves. Prior to today though we had being doing work that suited them down to the ground, namely the broad sociological theories of Functionalism, Marxism, Feminisms (Marxist, Radical and Liberal), the New Right and Postmodernism and what each of them have to say about family structures. This lesson, the hinge point following the half term holidays, was where I wanted to move them from the theoretical arguments somewhat and demonstrate to them the importance of empirical evidence, specifically in the form of official statistics on recent and current patterns of marriage, cohabitation, separation and divorce. The learning objectives for the lesson, now separated in the Canons lesson observation proforma into statements about 'content', 'skills' and 'beliefs' (although I'm still insisting that there is an alignment with my tried and trusted WALT, WILF & TIBS) are shown here. I'm aware that the 'beliefs' section is a little pragmatic but I have been working hard on getting them to only target the B, A, A* grades (or sheep grades as Mr Baa-rtle likes to call them!!) and am reinforcing this challenge wherever possible. 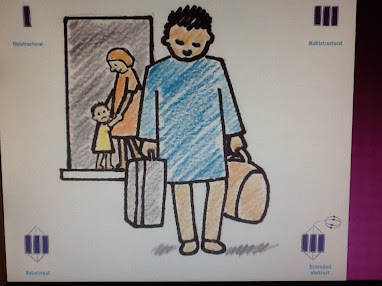 I was concerned that this switchover from the really meaty Sociology of high level theory to the somewhat acquired taste of official statistics might not be to their palate so I wanted a connection and activation phase of the lesson that explicitly connected the two. With this in mind I began with my favourite kind of connection phase activity, a striking image that offers opportunities to test out the maxim that a picture tells a thousand words. This is the one that I came up with. In order that they 'telescoped' their way into the picture I asked them initially to approach it in a unistructural manner, identifying a single aspect of the image that struck them before then asking them to move to multistructural and relational understanding of the picture by identifying other elements that connected with their initial area of focus. Finally I asked them to consider the picture in an extended abstract way by considering how they might be able to apply it to the sociological theory that they had studied in the previous half term. In all of this I utilised a think-pair-share mode partly in order to help build trust in their new Home Groups (mixed ability, gender, ethnicity and friendship groups that they had moved into at the end of the previous half term) but mainly to allow me to target questions at the quieter students and those who had struggled in early assessments.

Of course this initial focus on theory and a rich source image played completely to their strengths which is, after all, the importance of a good connection phase activity. It also served as a very useful revision activity in this their first lesson of the new half term. The struggle was to keep them focused on following the 'telescoping' process and not immediately beginning their feedback by jumping straight into their relational responses; I felt it vital that they considered the individual details, not just the big picture, if they were to be able to make sense of the data sets that were to follow. 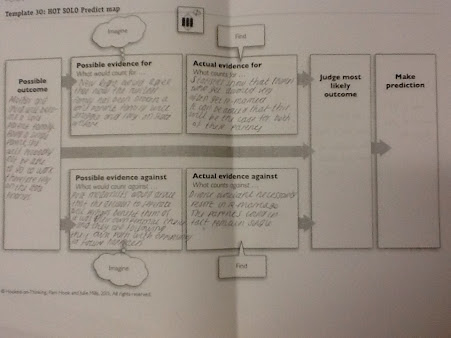 Having done this I then used one of Pam Hook's SOLO Hot Maps to ask them to predict what would happen to the family in the picture, or to one of the members of the family. I love the SOLO Hot Maps and I am always surprised at how little love they appear to get on twitter or blogs about the use of SOLO. In particular I like blowing them up to A3 to allow them to be used by pairs or groups for collaborative thinking with a real focus on process not product. Having made their initial suggestion of a possible outcome they then had to use their knowledge of sociological theory to suggest 'possible evidence for' their prediction and 'possible evidence against' it. This allowed them to interrogate their understanding of conflicting sociological theories, enabling them to pit New Right perspectives against Radical Feminism, or the socialisation of Functionalism against the ideological control of Marxism. As evaluation of competing theories is a vital element of the higher bands of the marks scheme, the structure of the SOLO Hot Map was absolutely perfect for this activity. 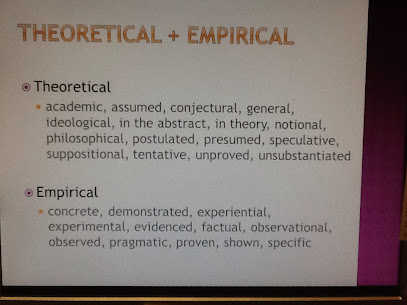 It was only after this point that I shared with them the learning objective (I have grown ever fonder of the notion of slowing the pace of activities in order to quicken the pace of learning), and because the 'skills' element of the objective explicitly mentioned that they needed to be able to link THEORETICAL and EMPIRICAL evidence I decided to take time out with them to explore the literacy of both words. As an English teacher by trade I much prefer using synonyms for exploring the meaning of words rather than using dictionary definitions. With this slide I 'hid' the synonyms for 'empirical' and asked them to make predictions of the kinds of words that they thought would come up having explored in discussion the range of synonyms for the word 'theoretical'. The unveil then revealed that the students had been able to use their antonyms for 'theoretical' in order to very accurately predict the meaning of 'empirical', which was a major improvement upon previous years when I have laboured to explain the vocabulary to students. 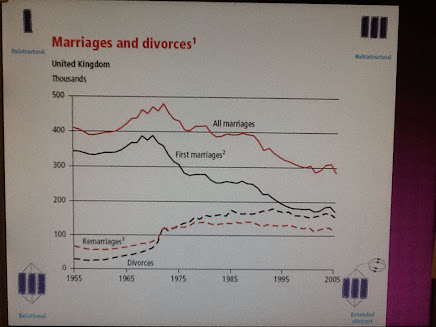 The next bit was the leap of faith into the official statistics as I showed them this graph from the amazing teaching tool that is Social Trends. For the uninitiated this is a summary document, published annually by the Office for National Statistics, of trends emerging from a huge number of governmental surveys and other research tools. It features commentary on a range of issues from education to crime, and transport to health and includes numerous tables, charts and graphs to illustrate this commentary. I use it massively for all units I teach, but this graph is my favourite because of the richness of its data. In order to wean the students onto the empirical data included here I followed exactly the same 'telescoping' process as they had used when exploring the image at the very start of the lesson. They had to identify one aspect of the graph that they felt was interesting (unistructural) and then talk with other members of the group to ensure a range of understanding of different elements of it (multistructural), before seeing if they could identify links between the different elements such as the relationship between first marriages and all marriages (relational). The implicit message from my structure of this lesson was intended to be that reading a graph involves exactly the same thought processes as reading a picture, in other words those of reading. 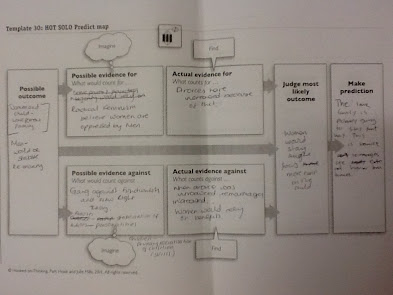 The final step in helping the students successfully move from being able to confidently use theoretical knowledge to being able to confidently use empirical evidence was to ask them to apply the data in an extended abstract way to the predictions they had made in the first part of their SOLO Hot Maps. Having included reference to their understanding of sociological theory as possible evidence for and against their predictions, they now had to use aspects from the graph as 'actual evidence for' and 'actual evidence against'. This worked better than I could ever have hoped for, with all groups being able to identify data from a single source in both support of their initial hypothesis and as a challenge to it. Simultaneously they learnt a tremendous amount about marriage, divorce and remarriage almost by osmosis through the process. In particular their assumption that divorce almost inevitably led to lone parent families was completely overwhelmed by the realisation that remarriage is a reality for a significant number of divorcees. It was noticeable that more groups changed their predictions in the light of the empirical data, with one student noting that he would never have thought that numbers could have so much to say about the real world of relationships.

The rest of the lesson involved the students being given other charts and graphs in small groups in order to explore in more depth the facts behind patterns in marriage, divorce, cohabitation, same-sex relationships and lone person households. The confidence they had gained in using both theoretical and empirical data during the first activity using the SOLO Hot Maps was carried with them into a pure data analysis task and we will square the circle on Friday when we add to their analyses of these new data sets with the theoretical information that attempts to explain the reasons for the patterns they have identified. For now I am simply happy that the students have managed to connect the poetry and the prose of sociological enquiry.

Posted with Blogsy
Posted by Unknown at 13:48