I had thought that I had done with the whole SID Learning thing after my previous blogpost. My expectation was that today my Y12 Sociologists would be instead moving on to some peer-evaluation of their practice tests and that this would be feeding into some whole class modelling of the exam-essay writing process, but yesterday three so much at me that I had to abandon my plans and so last night I made the decision to continue my exploration of learning that is slow (using extended periods of time for activities), interdependent (built on a commitment to explorative group-working activities) and deep (dealing with challenging concepts, difficult theories and sheep grade skills). There are two reasons for this approach: that it makes planning less frenetic and more focused and that it makes lesson time for the teacher less intensive. With that in mind I'm actually blogging as this lesson is going on, such is the slowness, interdependence and depth of student learning in this lesson. At present they are teaching each other one of four key theories that they have been learning in the first SID part of the lesson. Let me explain.

The students are moving back onto the theoretical element of the course, having spent the last few weeks working on the use of official statistics and the potentially dry topic of 'Demographic Trends in the United Kingdom' we are now back on the extremely fertile terrain of 'Gender Roles Within the Family', which is likely to be very well suited to the talents of this group. And just as well, as it is a fairly stock item on exam papers (I struggled to find a past paper last week that didn't have a gender roles question on it). The focus for this lesson is very much on placing students in the mantle of the expert. They have to learn lots of small studies within each sociological topic, and it can be quite tedious using a didactic style to get these across (although I am happy to deploy this occasionally if it is the right thing to do). The other skill I am prioritising in this lesson is the ability to apply specific examples to the theory and to use these studies as proxies for their broader sociological theory in evaluating each other. Tough stuff in spite of the progressive methods used.

We began the lesson, in true 'connection phase' style with the attached YouTube clip (actually this is a better version than the one I used, which I have just found and will use in the future) putting the sociologically infamous Good Housewife's Guide to some moving images. Our brief whole class discussion allowed students to explore their previous learning about sociological theories and their views of the functions of the family, from Functionalism to Marxism to Feminism. It was also an opportunity to explore the group's responses to the notions of gender inequality within families, and it was good to see that the young men I teach were as shocked as the young women about the nature of gender roles in times gone by, none of them expecting or wanting this to be representatives of their future lives.

For this lesson I allowed them to start the first main SID task in four friendship groups (you'll see the reason why later) and I gave them nearly half an hour to fully learn and make notes on one of the following theories:

During the course of this I asked some members of the group to focus on the core sociological text we use, but also asked others to use the extra textbooks that I had placed in the centre of the room and to follow the twitterfeed for our class (@canonsock) as I tweeted out three items for each of the four studies, including criticism of them. They had three tasks to concentrate in, two of which were of key importance for this phase of the lesson. The first of these was to record the main details, and particularly the core sociological vocabulary of the concept. The second was to link the theory to specific examples and, because we see all texts as having value in exploring social phenomena they were allowed to use examples from their lives, from the news stories they have come across and from the world of the media and fiction. 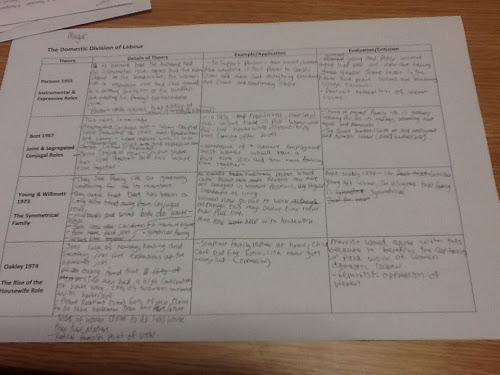 And then we jigsawed the groups. Students had to number themselves 1 to 4 and all the 1s, 2s, 3s, and 4s got together in a new grouping (hence my happiness with allowing them to start in friendship groups). Each group had a full half hour to teach each of the other members their study, whilst the others had to record their findings on the sheet (examples of which are included here). We split this into five minutes to share the main details of the theory and examples they have seen of this in the real world, in the reported world and in the fictional world around them. 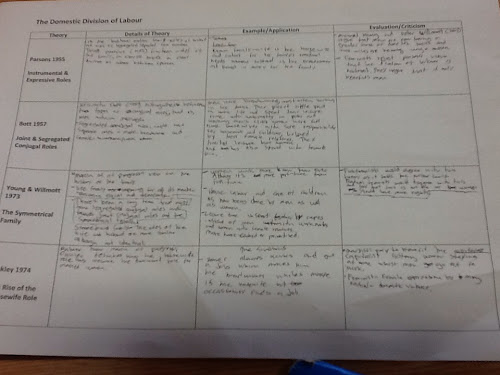 The final ten minutes of the interdependent group work was for the newly combined group to focus on evaluating each of the studies and, more specifically, on using each often studies to criticise each of the others reinforcing the circular nature of sociology's internal arguments. The obvious tack was for students to use Functionalists such as Parsons to evaluate Feminists such as Oakley, but they were in this activity being asked to use more nuanced criticism by using similar thinkers such as Bott and Oakley in evaluation of each other. We even managed to explore the notion that criticism can involve agreement not just reflect disagreement and conflict.

By the end of the session students had A3 sheets that were absolutely crammed with high quality information, but I wanted to be able to see how far this 'learning' had been embedded in their understanding of the core concepts and how effectively this could be applied to a sociological text purporting to represent a typical family. Cue an 80s OXO family commercial.

I use the OXO commercial ever since watching a Naomi Woolf feminist deconstruction of one of these seminal ads showing how effectively the patriarchal expectations of both the men and women in the family entrap them and perpetuate inequality. I wanted to include it here but haven't been able to find it. The students were asked to watch this commercial once through and just absorb all the information about gender roles within it. They then had a moment to consider which of the theories that they had been taught (not the one that they had taught) that could be applied to the advert, before watching it through again to help them consider how appropriate the theory actually was.

The discussion that followed was excellent, with students able to explore the fact that the Dad cooking was an example of joint conjugal roles, but also acknowledging that the fact that he hadn't done so before meant that in reality they were segregated roles. They were able to see the male-female divide in the family and that whilst the men of the household were able to feed themselves they made no attempt to provide food for the returning women. They also noted that the females had clearly been out shopping and were able to discuss how some joint conjugal roles are seen as more acceptable for men than others, reflecting on how in their families washing dishes is seen as more acceptable to men than ironing for example. They were able to comment on the affective role played by the man, and whether simply cooking for children is enough to demonstrate care and love for them (they noted how little genuine warmth was visible). And finally they explored how even if the mum was delighted to have "Saturday's off from now on" this would still leave her with a 6:1 ration on culinary responsibilities within the house.


So job done for another SID Learning lesson? Not quite. For the final hour of the lesson, returning after break, there was a similar activity planned with some new studies with students jigsawing back into their initial friendship groups. It didn't quite work, perhaps due to the break or maybe down to the repetitiveness, but certainly not - in my opinion - down to the slowness, interdependent nature or depth of their work. After a ticking off they still produced the good goods, and we now seem well placed to complete the course. Moreover, just 25 minutes after they have left this immensely productive lesson I have been able to reflect on it and consider my next steps in engaging them in SID Learning.