For those of you who didn't read my first post on the mockronym SID Learning, let me start this post by telling you that it stands for Slow, Interdependent, Deep learning that l have been prioritising with my Y12 Sociology of late. The good news is that SID Learning doesn't involve you buying any videos, reading any 'how to' guides or hiring me in as a consultant. In fact there's every chance that the concept of SID Learning, born in my most recent post will die with this one. But it has proven useful to get across the notion that, as Michael Wilshaw of Ofsted has written, outstanding lessons are about the "pace of learning", not the "pace of activities".

So this is an account of the second 3 hour lesson of SID Learning that I had with my Sociology group on Wednesday of this week. The broad area of study was again the demographic trends within the United Kingdom in recent years, and the core skill being developed was again the ability to use official statistics as key empirical evidence that the students could use to evaluate and validate the sociological theories that they had spent much of the first half term learning. In this lesson the narrow focus was on patterns of migration (immigration, emigration and net migration) and the impact of these patterns on families and households, and other social structures - thereby also preparing them for other aspects of the course, education and crime, as well as wider sociological topics. 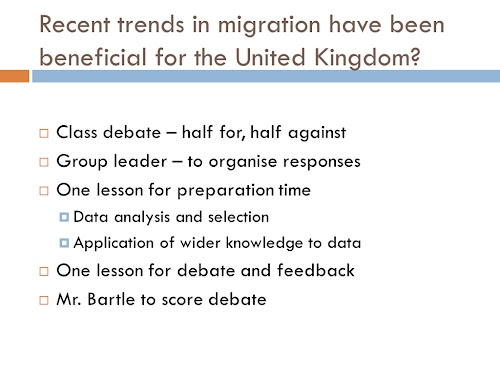 As with the previous lesson the aim was for me to do as little direct instruction as possible and to allow them to make sense of the information over an extended period of time (slowly), collaboratively through group work (interdependently) and in a way that allowed them to make mistakes and find powerful messages within the data (deeply). To this end I gave them a simple task that would play very much to their strengths as speakers and listeners: a class debate on the pros and cons of migration.

I began the lesson by asking them to place themselves on a continuum for their personal feelings about migration and its contribution as a force for good or a force for ill in contemporary Britain, with the usual provisos about respecting all opinions. Unsurprisingly most students placed themselves around the middle of the spectrum but there was sufficient differentiation of viewpoint to allow me to split the group down the middle. I then told those who were broadly positive about migration patterns that they would be the ones arguing against it and the group most negative about migration that they would be the ones arguing for it. There were two reasons for this, the first being that it would help to temper passions in discussion of a challenging subject matter (particularly given the very diverse nature of our intake) because a passionate case against immigration would be being made by someone personally in favour of it. The other reason for doing this is that it takes students out of their comfort zones and forces them to scrutinise their own views for inherent bias and possibly even change them. Sometimes excellent Sociology students can underperform because they struggle to write in a balanced way, such is the power of the subject. 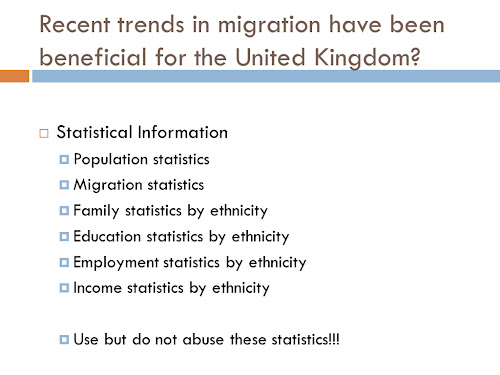 I then introduced students to the range of data I wanted them to use in putting together their sociological arguments. These were entirely drawn from the superb Social Trends documents of recent year (I'll not sing their praises again as I did so in my previous post) covering everything from the patterns themselves to the data on family, educational an employment using ethnicity as a proxy for immigration. We took a brief detour into the limitations of proxy indicators that will help them when they start full study of the methods element of the course. The documents I used for this can be found by following this hyperlink to the file in my Dropbox account (https://www.dropbox.com/s/9w6ruil0ighgnmz/SCLY1%20-%20F%26H12%20-%20Migration%20facts.docx) 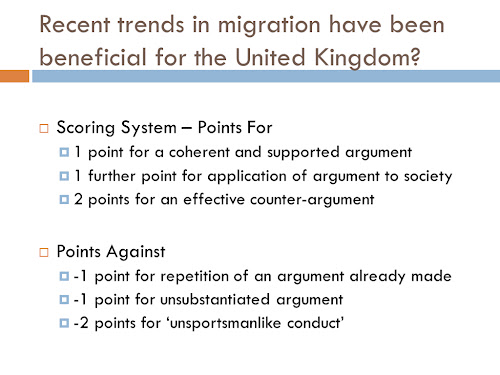 The final part of my input into the lesson was to let them know how I would be scoring their debate. I'm a great fan of having some numerical element to a qualitative activity, not because I believe that assessment can't be valid without some numbers and letters attached but because it gives me the chance to steer behaviours in a debate without having to actually interrupt it. An example of this is the awarding of points for counter-argument, because evaluation is a sheep grade (B, A, A*) skill and because it helps develop a back-and-forward flow to the debate. Another example is the loss of marks for unsportsmanlike (I did change to to 'person' in the lesson - oops, gender conditioning at work) because the groups then become self-regulating and you can hear them do so on the recording below. The other scoring rule, not written on the slide, is the loss of 5 points for any team member not making a contribution which makes it fun when they begin to realise that time is running out: more self-regulation and interdependence at work. 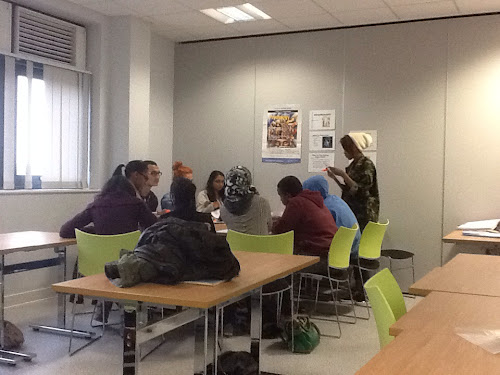 And then they were off. I asked for two team leaders to take charge of the organisation of their teams and was really happy when two students who I had asked to make more contributions in lesson, at the previous week's parents evening, volunteered to do so. They started pulling the classroom tables together and the data tables apart, identifying group roles and areas of focus for themselves. Mosts stayed in the classroom, others went on the hunt for more information, others did both via their smartphones. They did this for a full sixty minute lesson and then, after break for a further twenty. 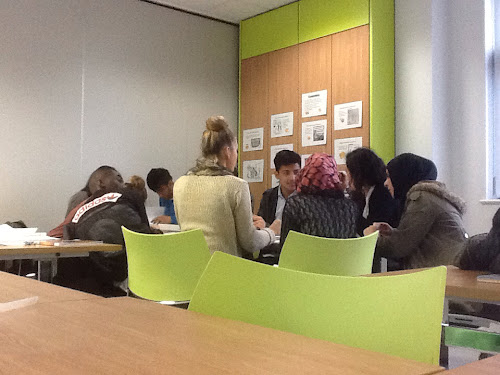 What did I do in this time? I offered to help but they didn't seem to want or need any, so instead I decided to hinder. I sat near one group and shouted out their developing arguments to the opposition team (cue shouts of "Siiiiiiiiiirrrrrr"). I encouraged them to send a 'spy' over to the other camp. I threw in the odd new rule for the debate to thwart them in some small trivial way. I did all of this to push them to be robust in their argument and secure in their use of data, and I did it so that they bonded more as a team (each team had ten participants so this was of crucial importance for success). 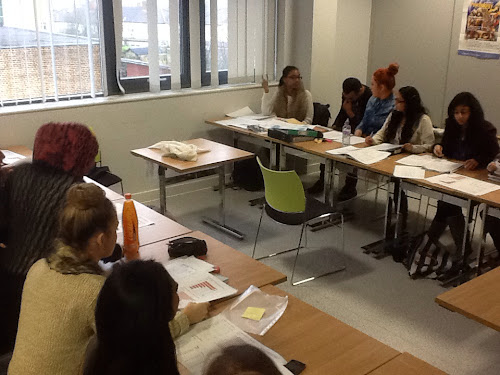 Then came the debate itself and they set up the gladiatorial arena in this picture, saving the final desk in the middle for me. I was determined that it should be just as slow, interdependent and deep as the planning had been, and so I gave them a full forty minutes in which to conduct it, I kept myself out of it with the exception of some prompts to reduce the contribution of some dominant individuals and I allowed them to dictate the order in which they addressed the issues. The result was phenomenal and can be heard here (https://www.dropbox.com/s/tfn83mrawkfrmmj/DV-2012-11-21-114042.m4a) if you have the time to listen.

The students coverage of a wide range of topics, their use of specific data to make points and to challenge one another, their self-regulation (most of the time - a few points were lost to unsportspersonlike behaviour, including one where they were unsportspersonlike to their own team!) to ensure all spoke, their sneaky little ways to disrupt the opposition ("sorry can you repeat that") and their absolutely passionate commitment to an argument that was the opposite of their personally held belief shine through in the recording.

The reason why this lesson was so successful for these highly talented students was because the learning was slow with one brief input from me followed by 60 minutes of planning and 40 minutes of debate. It was also successful because it was interdependent, a group task but requiring subgroup working to cover the range of data and then individual contributions to the actual debate. And it was successful because it was deep, with students picking out key information from sometimes highly complex data before linking it to their knowledge of core sociological theories whilst simultaneously pondering the counter-arguments that would come and their possible counter-counter-arguments to those. The very model of SID Learning.

Oh, and if you're wondering who won, the team arguing that recent migration patterns have been beneficial to the UK scored a two point victory. For me though, the narrowness of their success was the best indication that both teams had done some very powerful SID Learning during the course of the lesson.

Posted with Blogsy
Posted by Unknown at 09:41